Ajmer Blast Convict, Out On Bail, Gets Hero's Welcome In Gujarat Hometown

Bhavesh Patel, one of the convicts in the Ajmer dargah blast case, was granted bail by Rajasthan High Court last week. 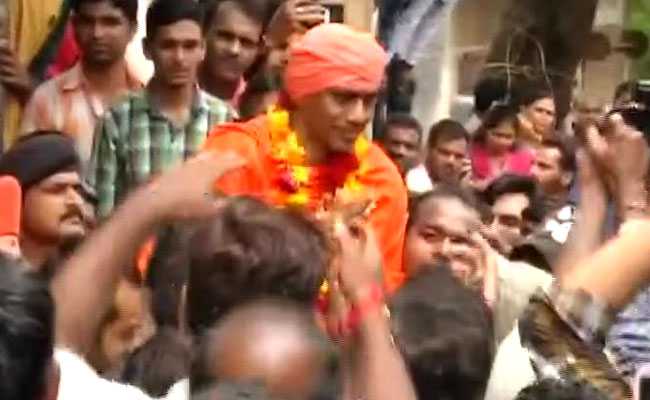 Bhavesh Patel arrived in Bharuch, his hometown, from Ajmer.

A convict in the 2007 Ajmer dargah blast case, in which three people were killed, was accorded a hero's welcome in Bharuch on Sunday by local people and members of the VHP, RSS and BJP, after he was released on bail.

The convict, Bhavesh Patel, who had been awarded life imprisonment by a trial court in Ajmer dargah blast case, was granted bail by Rajasthan High Court last week.

Relatives of Bhavesh Patel, who was dressed in saffron robes and a turban, revealed to some of those present during the welcome ceremony that during his jail stay he became a monk and changed his name to Swami Muktanand.

As he arrived in his hometown of Bharuch from Ajmer, members of the outfits as well as of the BJP-ruled Bharuch Municipality along with public accorded him a warm welcome.

"VHP, RSS and BJP members along with hundreds of people welcomed him as he walked towards his residence at Hathikhana Bazar from nearby Swaminarayan temple, where he went to offer prayers after his arrival here," Viral Desai, spokesperson of south Gujarat unit of the VHP, said.

"Only after he came here that we learnt that he has already become a monk of an akhada, and has changed his name to Swami Muktanand. When he went to jail he was like any another common man," Mr Desai further said.

Bharuch BJP councillor Marutisinh Atodariya said, "A large number of members of the municipality were present to welcome him."

Among those present to welcome him was Surbhi Tamakuwala, president of Bharuch Municipality.

Mr Desai claimed Patel has been associated with the VHP and the Rashtriya Swayamsevak Sangh (RSS) since his younger days. He had also served as an office-bearer of the RSS's Bharuch unit in the past.

Reacting to the grand welcome accorded to Patel, social activist Nishant Varma said a hero's welcome to a convict by members of a political party is "unacceptable" and should be termed as "anti-national".

A person who is a convict, even if he comes out on bail, cannot be given a hero's welcome, he said.

"Anyone who adopts the name of a swami on his own...at least the akhara swamis and self-styled swamis are hypocrites. He might have been granted bail, but the lower court has pronounced him a convict," Varma said.

In March 2017, a trial court had sentenced Patel and co-accused in the case, Devendra Gupta, to life imprisonment.

The blast at the dargah of Khwaja Moinuddin Chishti in Ajmer at the time of Roza Iftaar on October 11, 2007, had left three pilgrims dead and 15 others injured.