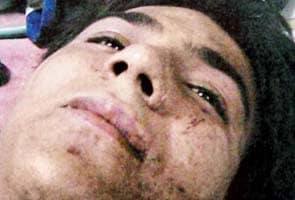 Mumbai: A senior official who was present during the execution of Ajmal Kasab yesterday in Yerwada jail said that a few seconds before his hanging, the Pakistani terrorist involved in the November 26, 2008, Mumbai attack mumbled: "Allah kasam, maaf kar do. Chhod do, aisi galti dobara nahin hogi."

The utterance was the only reaction from the otherwise passive Kasab before his execution. He did not talk to any one present and stayed calm all the while, said the official.

The senior official, who witnessed the entire preparation for the hanging of Kasab, said that officials at the jail were in constant touch with top officials at the national level till the very last moment in order to be in the loop if any stay order came to be issued by higher authorities.

Kasab was hanged at 7.30 am in a top-secret operation. IG (prison) Meeran Chadha Borwankar, DIG Rajendra Dhamane, Senior Jail Superintendent Yogesh Desai and Haveli Tehsildar Sandesh Shirke were among those present during the execution.

The senior official said that even the tehsildar, who was present during the execution, did not know it was Kasab who was to be hanged till he reached the jail.

The official said the tehsildar was informed only about "an execution" at Yerawada jail by District Collector Vikas Deshmukh the previous evening and asked to remain present at the prison at 5 am.

"The tehsildar looked shocked when the jail authorities informed him that he would be an eyewitness to Kasab's execution," the official said.

The officer said that when the tehsildar reached the jail, the authorities there asked him if he knew the reason why he had been called to the jail early in the morning yesterday. The officer said Shirke at first expressed shock, but after some time he calmed down.

"After some time the tehsildar recovered from the initial shock and even said that it was a historic moment to witness, one for which the entire country had waited for four long years," the official said.

The official said the Shirke's initial reaction was understandable as he was young and it was the first execution he was witnessing.

The official said that when Kasab was brought to the Phasi Yard with his hands tied behind his back, Shirke developed cold feet and was jittery about seeing a man die, but in a fraction recovered his nerves.

The official said that Kasab was wearing white jail clothes when he was brought to the Phasi Yard at 5.20 am. After the preparations for the execution were completed, the jail officials waited till 7.25 am to see if any stay order had been issued by higher authorities.

"After Kasab was hanged to death, maulavis were called to the jail and he was buried in a confidential place on the jail premises," the officer said.

Later that night
17 officials, including Force One commandos, in a convoy of 6 vehicles, escort Kasab from Arthur Road Jail to Yerawada Jail in Pune

Tuesday night
Kasab is informed of his impending execution the next morning. His last wish: "Inform my mother."

Promoted
Listen to the latest songs, only on JioSaavn.com
31 Number of hours from the time the 6-car convoy left Arthur Road Jail to the time he was executed