A woman who travelled in Air India business class with her three children, says she developed rashes all over her body. 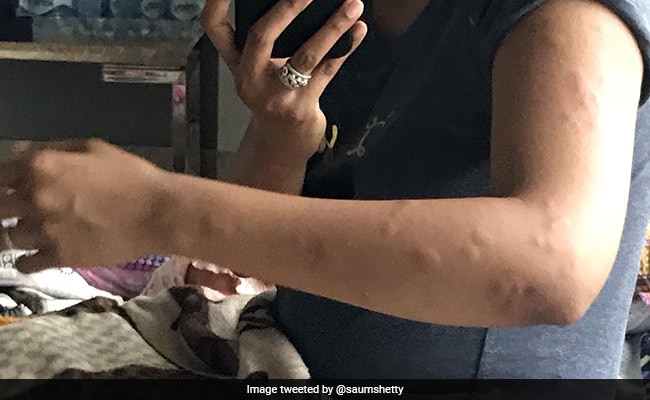 A passenger who travelled Air India's Newark-Mumbai flight last week has posted disturbing photos of what she says are bedbug bites on her arm. Saumya Shetty is the second passenger in a week to complain about bedbugs on the same flight.

Saumya Shetty, who travelled business class with her three children, including a baby, and arrived in Mumbai last Wednesday, says she developed rashes all over her body. She alleges that despite her complaint to the flight staff, she was forced to sleep in the same seat and got a seat change only a short while before landing in Mumbai.

"Covered in painful bedbug bites all over my body thanks to business class of #AirIndia is this what you charge for?i only got moved to another seat in the morning when we were landing, it was disgusting! Mind you I was traveling with 3 kids," Ms Shetty said in a series of tweets tagging the media.

"Traveled business class thinking it would help with three kids. I'm covered with bed bugs bites and it's been a painful day so far," she posted.

On Friday, the Press Trust of India quoted sources to say that a baby was bitten by the bedbugs on the same flight, which left passengers agitated.

Another passenger, Pravin Tonsekar, tweeted that his seat, also in the business class, was infested with bedbugs.

"...just arrived from New York on Air India 144 business class with family. All our seats infested with bed bugs. Sir, have heard of bed bugs on trains but shocked to experience on our maharaja and that too business," Pravin Tonsekar tweeted and tagged the airline and the Civil Aviation Minister Suresh Prabhu.

He said his "wife and daughters had to suffer half of the journey sitting in economy seats with broken tables and inoperative TV".

Air India responded to the tweets and promised to act. "We are sorry to hear this, Mr Pravin. Sharing the details with our maintenance team for corrective measures in this regard," the airline tweeted.

Air India later released a statement, calling the incident an "isolated" one.

"Air India is deeply concerned with a few reports of bugs causing inconvenience to its esteemed passengers. The issue has been viewed seriously and every possible step is being taken to closely inspect and further strengthen our system at every level to ensure that such isolated incidents of passenger discomfiture do not affect our consistent performance," the airline said in a statement.

"Experienced experts have carried out extensive service on the aircraft from fumigation to overhaul of the upholstery/seat covers/carpets etc to ensure that passengers keep enjoying their in-flight experience with us as always without any complaint of inconvenience," it added.

In August last year, a rat was spotted on Air India's Delhi-San Francisco flight, one of the longest in the world. Take-off was delayed by nine hours. Over 200 passengers were on board. The aircraft was taken to the parking bay, where it was fumigated for hours.