Air Commodore Sanjay Sharma and his daughter, Flying Officer Ananya Sharma, posed in front of the fighter plane and the photo is now going viral. 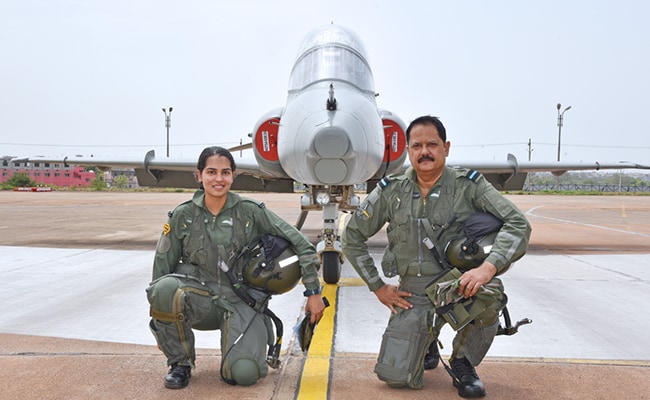 A photo is going viral on the internet, which shows an Indian Air Force (IAF) officer posing with his fighter pilot daughter. According to an Air Force release, Air Commodore Sanjay Sharma and his daughter, Flying Officer Ananya Sharma, flew a Hawk sortie in Bidar, Karnataka. The flight took place in May 30.

The father-daughter duo created history when they flew in the same formation of Hawk-132 aircraft, the IAF said.

"There has not been any previous instance in the IAF where a father and his daughter were part of the same fighter formation for a mission. It was the mission where Air Cmde Sanjay and Fg Offr Ananya were more than just father and daughter. They were comrades, who had full faith in each other as fellow wingmen would," the IAF said in the release.

The photo shows Air Commodore Sharma and his daughter posing in front of the fighter plane. Ms Sharma is currently undergoing her training in Bidar before she graduates onto faster and more superior fighter aircraft of the IAF.

They have become a hit on Twitter, with people calling the duo "an inspiration".

"Excellent...what a proud moment for both father and daughter," said a Twitter user.

AIR COMMODORE SANJAY SHARMA and his daughter ANANYA SHARMA became the first father-daughter pair in the #IndianAirForce to fly in formation of the Hawk AJT in Bidar.

Air Commodore Sharma was commissioned in the fighter stream of the IAF in 1989. He has had an extensive experience of fighter operations, having commanded a Mig-21 Squadron as well as a frontline fighter station.

Ms Sharma, meanwhile, was commissioned as a fighter pilot in December 2021, five years after the IAF started accepting female pilots into its fighter squadron.

She has completed her BTech in Electronics and Communication.