After teen's rape and death, a village is distracted briefly by Sonia Gandhi's visit 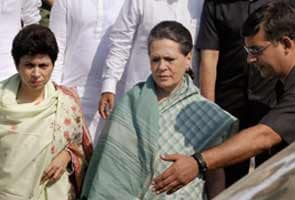 Jind (Haryana): At 6 am, the village was slowly stirring. One small house, in this part of the village where Dalit families stay, was earmarked for special attention. This modest single storied brick and cement home is in a small village in Jind, Haryana that recently made headlines after a 15-year-old Dalit girl committed suicide after she was allegedly gang-raped.

It's still too early to catch the sun, but the excitement in the village is over something else entirely. There are scores and scores of policemen that are trooping in, making it look more like a morning parade than just a regular day at work. Not too far away, the moo of the cow goes entirely unnoticed as media vans charge their way into the village, leaving behind a cloud of dust. And it's still just the trailor of what's to come.

The village is gearing up for Congress president Sonia Gandhi's visit. So the roads are hurriedly cleaned up, the garbage pushed to locations her convoy won't pass through and the sound of metal pierces the morning air as policemen lazily drag the barricades in place.

The girl's mother is at home though not away from the media glare. She politely obliges as reporters pour in to speak to her, even acknowledging at times that maybe it was the attention her daughter's case got in the media that may have motivated the leader to come. Slightly taken aback by the scenes in her house, the girls grandmother looks more lost. Any questions to her and they are promptly directed towards the daughter-in-law.

Over the next couple of hours, a handful of camera crews now add up to over 20, and that's a conservative estimate, the mother is shielded from the press, SPG starts 'taking over' the area, OB vans are abruptly moved, and there is at least one policemen on the rooftop of every adjoining house for security.

Congress president Sonia Gandhi will arrive at 10 am to offer her condolences to the girl's family. Last week, her 15-year-old daughter was gang-raped in a house barely a few doors away just as she was returning home from the shop nearby. A police constable allegedly ensured the teen could not escape her assaulters, as he stood guard outside the door. When she was finally released, she set herself on fire and was dead moments later.

There are mattresses and cots being taken into the simple, modest house, which has a little more than two rooms and a verandah organised by neighbours. Inside, the mother sits right at the door with her relatives. In a house that is in mourning, there is no photo of the child who was assaulted. She has four sisters, and two brothers, all except one younger than her. None come outside to talk to reporters. It's difficult to imagine how this family must be coping with their loss as they can see the house where the young child set herself on fire after she was raped. It's the house right next to theirs where a relative stays.

When Sonia Gandhi does arrive, it is in a convoy of three cars. There are no sirens or flashing lights. She does not speak to reporters on her way in. The Congress government in Haryana has much to answer for. In the last month, 11 rapes have been reported across the state, many of them involving Dalits and minors, some of them filmed on cellphone cameras, grotesquely amplifying the trauma for victims and their families. In the 10 minutes that Mrs Gandhi spends inside the house, news comes in of another two rapes.

When she emerges, the leader who  ranks high on multiple lists of the world's most powerful women, promises justice. "I criticise in the strongest terms these kind of incidents. The guilty should get the severest punishment," she says. Accompanying her is the Haryana Chief Minister Bhupinder Singh Hooda, whose response so far to the spate of crimes against women in his state has been frustrating and inadequate. The visit by his boss has been an attempt to undo some of the damage done by statements from local party leaders. Phool Chand Mulana, who heads the state branch of the Congress, said that the spate of rapes, many of them involving Dalit minors, was being sensationalised as "a political conspiracy."

Minutes after Mrs Gandhi's departure, the mattresses and cots borrowed for her visit were hastily removed. Dressed in an red and black faded sari, the woman who lost her daughter says, "She promised me that I will get justice... I have hope now."

Her 15-year-old daughter was enrolled in school, not a given in rural Haryana.

By 12 pm, the cameras are headed out, the policemen all but gone and barricades carted away. And just as the villagers had lined up to watch the scenes with curiosity, within minutes, they get back to their charpois, hukka and chatter as if the last few hours were just another page from the routine of their everyday lives.