After Sushma Swaraj's Message At UN, US Asks Pak To Act Against All Terror Groups 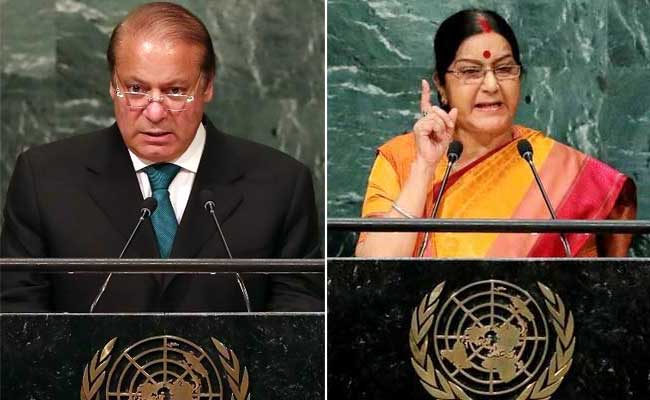 After Sushma Swaraj's speech at UN, US said Pakistan should close all terrorist havens.

Washington: Following External Affairs Minister Sushma Swaraj's speech at the United Nations General Assembly session wherein she asked the world to act against countries harbouring terrorists, the US has said that Pakistan needs to target all terror groups, including those that target neighbouring countries.

"Our focus with Pakistan is to enhance their capability, as I just said, to deal with a terrorist threat on their soil," US State Department Deputy spokesperson Mark Toner said in his daily press briefing here on Monday.

"They're fighting a serious and sustained campaign against violent extremism," he said.

"We do believe that they're making progress, that they're taking steps to counter terrorist violence, but at the same time we've been very clear that they need to target all militant groups, including those that target Pakistan's neighbours, and close all safe havens."

These comments come after the September 18 cross-border terror attack on an Indian Army base at Uri in Jammu and Kashmir that claimed the lives of 18 soldiers.

India has blamed the Pakistan-based Jaish-e-Mohammed terror outfit for the attack.

Mr Toner called for normalisation of India-Pakistan relations saying that there was "no zero-sum game" in the region.

"I think our longstanding position is that we believe India and Pakistan really stand to benefit from the normalisation of relations between them and practical cooperation between them, and we encourage both India and Pakistan to pursue and engage in direct dialogue that is aimed at reducing tensions," he said.

In response to a question of Russia carrying out its first ever joint military exercise with Pakistan close on the heels of the India-US "Yudh Abhyas" drill in Uttarakhand, Toner said: "Well, if the insinuation is that there's some kind of tit-for-tat or Great Game being played out here, that's not at all the case. Look, we've long said with regard to Pakistan, with regard to India, with regard to the region, there's no zero-sum game here."

Stating that the US was pursuing "very close relations with India", he said that Washington has "a deep and broad bilateral and multilateral relationship" with New Delhi.

"They (India) are the world's largest democracy and we share, I think, a very similar vision of the world," Toner said.

"And we obviously have very close trade and economic ties with India, and also that extends to security cooperation."

Promoted
Listen to the latest songs, only on JioSaavn.com
Earlier on Monday, Sushma Swaraj, in her speech at the 71st session of the UN General Assembly, said: "These nations, in which UN declared terrorists roam freely, lead processions and deliver their poisonous sermons of hate with impunity, areas culpable as the very terrorists they harbour. Such countries should have no place in the comity of nations."

In a warning to Pakistan she said, "History proves that those who seed extremist ideologies, reap a bitter harvest."