After Over 4 Months, Bihar Assembly Debates Manhandling Of MLAs By Police

Bihar Assembly Monsoon Session: The brief monsoon session of the Bihar bicameral legislature that started on July 26 will end on July 30. A debate was held on Wednesday on the infamous police action against MLAs during the budget session. 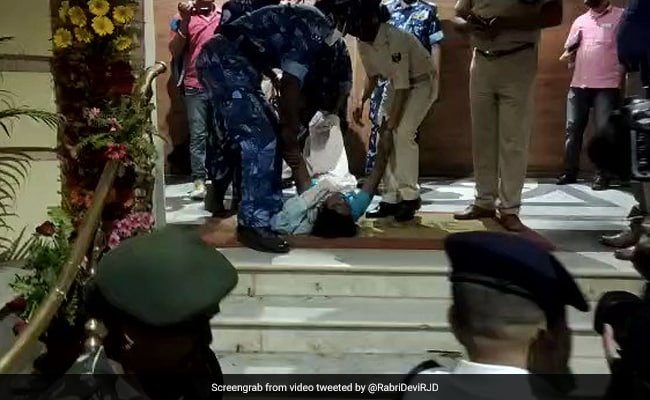 Sparks flew inside the Bihar assembly on Wednesday when a debate was held on the infamous police action during the budget session which involved manhandling and physical eviction of many opposition MLAs after an unprecedented disruption.

The decision to hold a debate on the issue was taken after a meeting of the Business Advisory Committee convened by Speaker Vijay Kumar Sinha who had been held hostage inside his chamber by the opposition legislators on the fateful day, following which police was called as the marshals were found unequal to the task.

The decision to conduct debate smoothed ruffled feathers of the opposition which had announced to boycott rest of the monsoon session if the issue was not discussed.

The brief monsoon session of the Bihar bicameral legislature that started on July 26 will end on July 30.

The debate on the incidents of March 23, termed as a "murder of democracy" by the opposition, began at around 4 pm and continued for more than an hour till the day's proceedings came to a close.

Leader of the Opposition Tejashwi Yadav was, predictably, all fire and brimstone as he sought to squarely blame the Nitish Kumar government for the ill-treatment of opposition legislators at the hands of the police.

"Two constables have been suspended in connection with the incident, we are told. Can a mere constable dare to touch an MLA inside the House without orders from the above? I demand strongest possible action against those at whose instance our fellow members were kicked with boots and women were pulled by their hair and saris", Mr Yadav, the younger son of RJD chief Lalu Yadav, said.

"I am told you have set up a committee to take action against MLAs who might have behaved inappropriately. If punishment is unavoidable, I offer myself. Take whatever action you want against me on behalf of my fellow members", said the 32-year-old with rhetorical flourish, asserting repeatedly that he was fighting for the "honour" of the legislators which was under attack from a high-handed bureaucracy.

He pointed out that the Special Armed Forces Bill, which had led to the ruckus in March, was being opposed so vehemently "just because it was giving sweeping powers to the police. And, as we have seen in case of prohibition law in the state, the sufferers are always the poor".

"Our fears of misuse of powers by the police were not unfounded. Only recently the Supreme Court has remarked that rule of the police seems to have replaced rule of law in Bihar..... so many bills have been introduced before and after that day. Never did it lead to such anxieties on part of the opposition", said Mr Yadav.

The government's reply came from Parliamentary Affairs Minister Vijay Kumar Chaudhary, notwithstanding repeated demands from many opposition members that a statement be made on the issue by Chief Minister Nitish Kumar himself.

Mr Chaudhary underscored that as a former Speaker himself, he was aware of the powers and responsibilities vested in the Chair and that "the government did not have and cannot have any say in anything that takes place inside the premises of assembly".

Defending the summoning of police, Mr Chaudhary said that he had a first hand impression of the gravity of the situation since "I too was locked up" inside the speaker's chamber when Mr Sinha was being thwarted by an irate opposition from reaching the House.

The minister also chuckled at Mr Yadav's declamation that he was ready to be punished on behalf of other legislators.

"Is it even permissible under rules? It is another thing that in a fit of passion the Leader of the Opposition went to the extent of saying that rules must be dumped (if these failed to safeguard the members' honour).

"But I wonder why is there so much of anxiety. The opposition seems intact under his leadership", said Mr Chaudhary with a wry smile.

In his concluding remarks, speaker Vijay Kumar Sinha recited an Urdu couplet to express his anguish and assert that he saw himself as a custodian of the house.

"All seem to be in agreement that what happened on that day was unfortunate. But, we must ensure that such incidents do not recur and we do not set a bad example for generations to come", he said.

In course of the debate, some of the members suggested that the speaker might have erred in his failure to adjourn proceedings for the day on March 23 and let tempers to cool down.

Former Chief Minister Jitan Ram Manjhi, whose son Santosh Suman is a cabinet member, rued that he was pained to see that in a fit of rage opposition members had sat on the Speaker's chair on the fateful day.

This was, however, strongly refuted by many opposition legislators who took potshots at Mr Manjhi, the founding president of Hindustani Awam Morcha, which was with the opposition Grand Alliance till a year ago.