Earlier this month, NDTV reported massive corruption - from ration transport trucks that were found to be motorcycles to wild exaggeration of the number of beneficiaries - in the ambitious free food scheme for children. 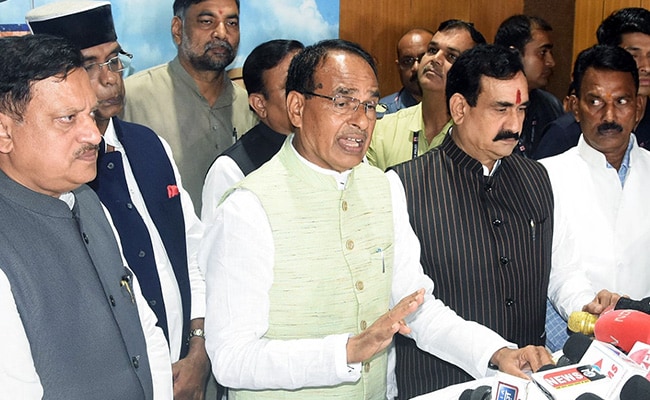 The Madhya Pradesh Assembly was adjourned for the day on Wednesday following protests by the Opposition over an NDTV report on irregularities in the implementation of a supplementary nutrition scheme for schoolchildren. Earlier this month, NDTV, which accessed a confidential report by the state's own auditor, reported eye-popping levels of corruption - from ration transport trucks that were found to be motorcycles to wild exaggeration of the number of beneficiaries -  in the ambitious free food scheme that was aimed to tackle the issue of malnourishment of children.

The House was earlier adjourned twice during Question Hour due to the protests over the issue.

At the beginning of the Question Hour, Chief Minister Shivraj Singh Chouhan sought permission from Speaker Girish Gautam to make a detailed statement on the issue to clear the Opposition's "confusion" over it. The Speaker gave permission to Mr Chouhan to make the statement after the Question Hour.

Leader of Opposition Dr Govind Singh of the Congress, however, raised objection saying that about 15 adjournment motions had been submitted on this issue and these should be discussed before the Chief Minister was allowed to make his statement. However, the Speaker declined to concede to the Opposition demand.

The Chief Minister denied irregularities in implementation of the scheme and said the Audior General's audit report on the programme was interim in nature and that the number of a vehicle mentioned in it was not registered on the transport department's "Vahan" portal.

"The audit was conducted between 2018 and 2021 and the draft report was sent to the state government by the Accountant General on August 12, 2022. But it was just a draft report and not the final report. The draft report pertains to 2018 to 2021, which includes 15 months of Congress government too. We are committed to focussed probe on all points of the report, irrespective of which government was in power in the state," he said.

"Our previous government had done baseline survey of adolescent girls (aged between 11 and 14 years) in 2018 and sent the report to the centre, as per which the total number of such out of school girls was 2.52 lakh (which includes those girls also whose name is enrolled in school, but they aren't actually going to school). The number of such girl beneficiaries under the scheme from 2018 to 2021 was 5.51 lakh only. The 36 lakh figure mentioned in the draft report pertains to total adolescent girls and not out of school adolescent girls (OOSAGs)," he added.

"In March 2018, the work of producing THR was taken away from private companies and handed over to women self-help groups (SHGs) by our government, but the subsequent Congress government gave it to MP State Agro Industries Development Corporation Limited in November 2019, resulting in the MP Agro taking all THR plants in its control in February 2020. This ultimately resulted in the objective of the mafia being kept out of THR system, actually being lost. But on return to power in March 2020, our government again gave back entire THR work to women self-help groups with effect from September 2021. Instead of 200 private contractors, the work has now been given to over 2000 women SHGs, whose collective turnover is around Rs 60 crores," the Chief Minister maintained.

"Already action has been initiated against 104 officials found responsible for irregularities, including suspension of 22 officers and dismissal of six others from service. Pension of three officers has been withheld, increments of two officers withheld and a departmental enquiry is underway against 40 officers," he said

"People accused for the scam are giving statements in the house, if Congress leaders are responsible they should be punished but atleast discuss first," he said.

The confidential 36-page report by the Madhya Pradesh Accountant General, accessed exclusively by NDTV, had found large-scale fraud, irregularities in the identification of beneficiaries, production, distribution and quality control of the ambitious free food scheme for schoolchildren.

Some of the more egregious findings of the report were based on an examination of around 24 per cent of beneficiaries of the Take Home Ration (THR) scheme for 2021, a programme tasked with providing much-needed nourishment to 49.58 lakh registered children and women.