Sources say ahead of his takeover of the Congress top post, Rahul Gandhi, 47, has been reaching out to allies. 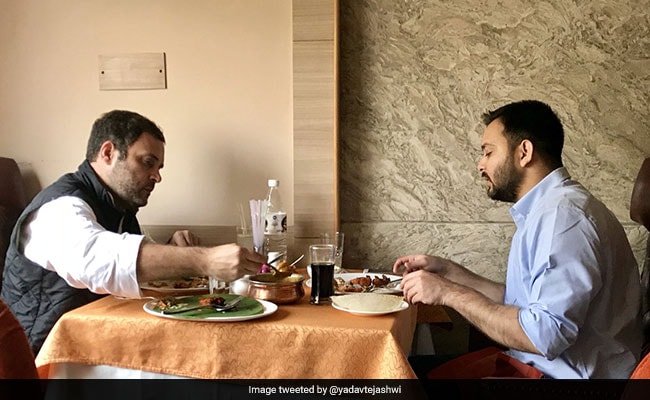 New Delhi: Four months ago, this lunch at a restaurant in south Delhi would have revved up Bihar's political shake-up. Today, it was just food for social media as Tejashwi Yadav, the younger son of Lalu Yadav, tweeted photos of his lunch with Rahul Gandhi, along with the comment that he felt "appreciated and grateful".

Thank you @OfficeOfRG for taking me out for wonderful lunch. Feel appreciated and grateful. Again thanks for taking out time out of ur tight schedule. pic.twitter.com/wqIg8Ss3xm

Sources say ahead of his takeover of the Congress top post, Rahul Gandhi, 47, has been reaching out to allies. While he may not always be comfortable sharing the stage with his father on account of corruption charges, Rahul Gandhi "sees Tejashwi as a solid ally", say sources.

"Rahul Gandhi also wished Tejashwi on phone on his birthday," said a Congress leader, conveying that nothing should be read into the meal.

Critics, however, seasoned the Twitter buzz with references to the mega political shake-up in Bihar in July, in which Chief Minister Nitish Kumar swapped his mahagatbandhan partners Congress and Lalu Yadav for the BJP, a long-time ally he had broken up with just four years ago.

While dramatically resigning on July 26, Nitish Kumar had said it was impossible for him to continue with his then deputy Tejashwi Yadav, who was accused of corruption. The Chief Minister expressed his deep disappointment when his meeting with Rahul Gandhi in that turbulent period failed to produce Tejashwi's resignation. He had nudged the Congress vice president to ask Tejashwi to resign but that didn't happen, and within days, it was all over for the grand alliance.

Promoted
Listen to the latest songs, only on JioSaavn.com
The scandal that left Lalu Yadav and the Congress without power in Bihar involves prime land in Patna jointly owned by Tejashwi, his mother and his siblings. The CBI alleges that the land was gifted to the Yadavs after Lalu, as union railways minister in 2006, facilitated a contract to a private company to run hotels.

Though he refused to ditch Lalu Yadav at the height of the coalition turmoil, Rahul Gandhi still skipped the 69-year-old's opposition rally in August, preferring to travel to Norway to meet political and business leaders.