After Cremation, Gen Bipin Rawat's Ashes To Be Taken To Haridwar Tomorrow

General Bipin Rawat, 63, his wife Madhulika Rawat, and 11 other defence personnel were killed when a Mi17V5 helicopter carrying them crashed near Coonoor in Tamil Nadu on Wednesday. 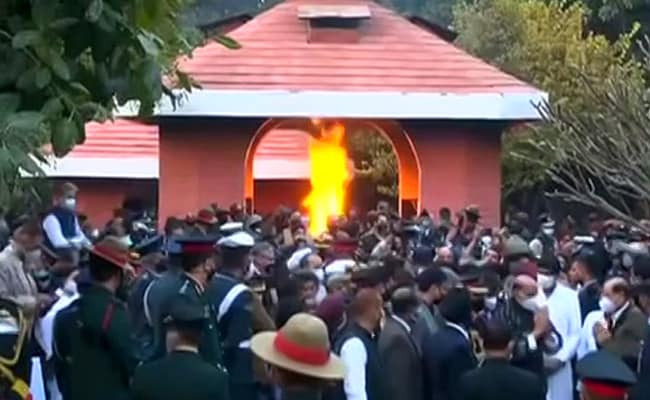 General Bipin Rawat and his wife Madhulika were cremated today in Delhi with full military honours.

Family members of Chief of Defence Staff General Bipin Rawat have planned to take his ashes to Haridwar on Saturday after completion of cremation rituals in Delhi, his daughter said on Friday.

He is being laid to rest at the Brar Square Crematorium at the Delhi Cantonment, where his remains were taken in a solemn procession from his official residence at 3, Kamraj Marg, on a ceremonial gun carriage, which was bedecked with flowers.

"After the cremation today at Delhi Cantonment's crematorium, we will be taking his 'asthi' (ashes) to Haridwar tomorrow," General Rawat's younger daughter Tarini, told PTI.

General Rawat, 63, his wife Madhulika Rawat, and 11 other defence personnel were killed when a Mi17V5 helicopter carrying them crashed near Coonoor in Tamil Nadu on Wednesday.

Tarini, along with her elder sister Kritika, on Friday afternoon performed traditional rituals at their home, before the remains of their parents -- General Rawat and Madhulika Rawat -- were moved to carriages headed for the crematorium.

The sisters, stood in sombre silence next to the remains of their father and mother, as a large number of visitors, including dignitaries, continued to stream in at the official bungalow of the Chief of Defence Staff (CDS), since morning.

Jaipur-based Vijay Rawat, 60, younger brother of General Rawat, and a former Army officer, said, "I had spoken to him before he went to Tamil Nadu to attend the function at Wellington. Had never thought fate would take him away from us".

"We will be taking his ashes, after cremation, to Haridwar tomorrow. We family members will be going to the holy town to immerse his 'asthi' (ashes) into the Ganga river," he said.

Around 2.20 pm on Friday, amid chants of 'Vande Mataram' and 'General Rawat amar rahe', the funeral procession of the Chief of Defence Staff General and his wife Madhulika Rawat left his official residence for the last rites at the Brar Square crematorium.

Military personnel from all the three services marched towards the streets as drummers played along in tribute to India's first Chief of Defence Staff.

As the remains of General Rawat, carried in a casket wrapped in a tricolour, was moved to a gun carriage, decorated with flowers, people showered petals and raised slogans in his praise.

India's first Chief of Defence Staff General Rawat was tasked with bringing in theatre command and jointness among the three services, and he was pushing this agenda with a tough approach and specific timeline in the past two years.

The remains of General Rawat and his wife had been kept at their official residence before cremation, to allow people to pay respects.