BJP chief Amit Shah had confirmed yesterday that the ruling coalition in Bihar will fight under Nitish Kumar's leadership. 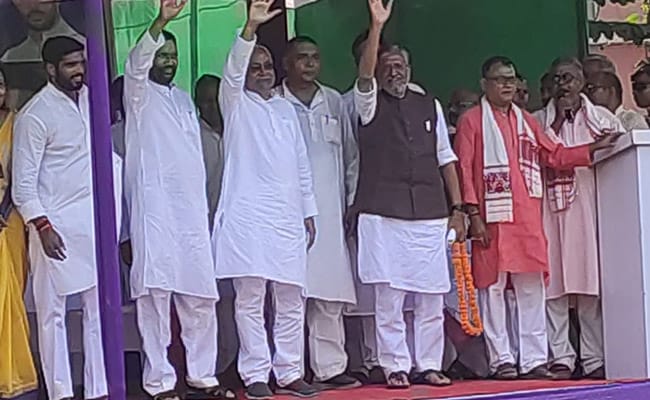 Bihar Chief Minister Nitish Kumar can heave a sigh of relief, now that BJP president Amit Shah has made it clear that the ruling coalition in the state will fight next year's assembly elections under his leadership. To demonstrate that the ruling coalition is still united, he took Sushil Kumar Modi -- his deputy from the BJP -- and Lok Janshakti Party chief Ramvilas Paswan along on a chopper ride to three rallies across the state today.

Sushil Kumar Modi had played peacemaker when the Bihar Chief Minister was being attacked by a section of BJP leaders over his handling of the Patna floods last month.

Nitish Kumar was all smiles during his first stopover in Siwan's Daraunda assembly constituency, where he assured supporters that the triparty alliance of the Janata Dal United, Lok Janshakti Party and BJP was united in its pursuit of Bihar's development. "Some people will keep saying things but do not fall into their trap. We are united in our commitment to turn Bihar into a developed state," he said in an obvious reference to Union Minister Giriraj Singh, who had emerged as one of his biggest critics during the Patna floods.

The political discord in the ruling alliance, much of which found its way into television channels and social media, had raised suspicions that the BJP may be trying to claw its way to power. However, Sushil Kumar Modi maintained through it all that there was no question of anybody but the Janata Dal United chief leading the coalition in the upcoming state election. Amit Shah confirmed this in an interview on Wednesday.

Sushil Kumar Modi endorsed Amit Shah's statement, claiming that it had resolved all the issues plaguing the coalition in a single stroke. "A masterplan to wreck the NDA in Bihar, orchestrated by some people with an eye on power, was foiled by the timely statement of Amit Shah," he said, tweeting out a similar sentiment.

LJP chief Ramvilas Paswan, who credits himself as the cementing force of the alliance, also praised the manner in which the BJP chief had ended the political uncertainty in the state.

However, top leaders in the coalition have confirmed that after being granted a 50:50 seat-sharing arrangement by the BJP in the Lok Sabha elections despite having just two MPs, the Janata Dal United is expected to make a reciprocal gesture in the state polls. They also cite the 2015 Bihar assembly elections, where the Janata Dal United and the Rashtriya Janata Dal contested from an equal number of seats despite the latter having just 22 legislators.

Promoted
Listen to the latest songs, only on JioSaavn.com
Comments
Nitish KumarAmit Shah