Gajanand Sharma is among the 30 Indian prisoners released by Pakistan on Monday on the eve of its Independence Day. 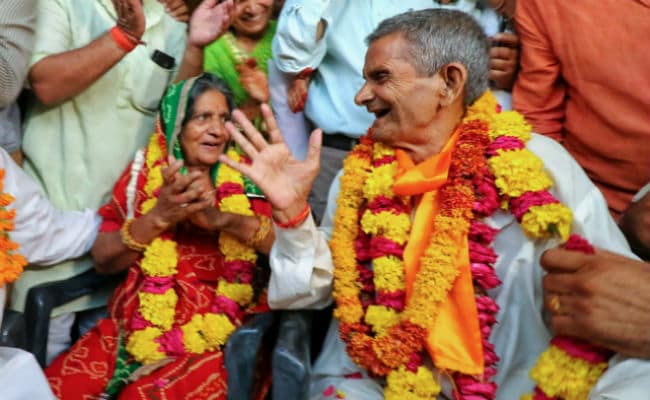 Family members including his grandson and granddaughters greeted him with sweets

After 36 years in a Pakistan jail, Gajanand Sharma was finally reunited with his family in Jaipur on Tuesday. The family members had come to local MP Ramcharan Bohra's house where several other people too had gathered to welcome Mr Sharma, now 68, to his home city.

Mr Sharma's wife Makhni Devi garlanded him. Family members including his grandson and granddaughters greeted him with sweets.

Later, the family left for their own home in the city's Brahmpuri area.

On Monday, watching the news on a mobile phone, Makhni Devi's eyes had welled up when she saw Gajanand Sharma walk into India through the Wagah-Attari border.

"Yes, he is my husband, but he has become very weak and lean," she had said at her home, surrounded by her family, neighbours and reporters.

He is said to have crossed into Pakistan inadvertently.

"I will definitely ask him how he reached Pakistan and how he spent all these years, but I will not complain," Makhni Devi said.

Mr Sharma is among the 30 Indian prisoners released by Pakistan on Monday on the eve of its Independence Day. Mr Sharma's family came to know in May that he was lodged in a prison in Lahore after Jaipur (Rural) police received a request for verification of his nationality.

(This story has not been edited by NDTV staff and is auto-generated from a syndicated feed.)
Comments
PakistanIndia