The decomposed body of 27-year-old Jahidur Islam, a native of Barpeta in Assam, was recovered from the site at 5 pm, Hnahthial sub-deputy commissioner Lalramdintluanga said. 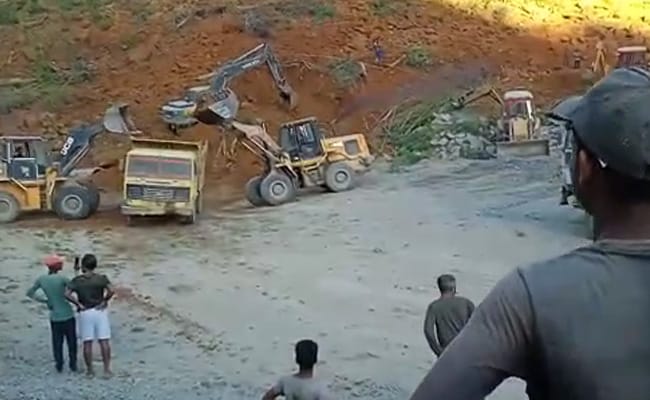 A total of 13 people were working at the site when the mishap happened.

The body of the last missing person in the stone quarry collapse in south Mizoram's Hnahthial district was found on Friday evening, 18 days after the disaster, an official said.

The decomposed body of 27-year-old Jahidur Islam, a native of Barpeta in Assam, was recovered from the site at 5 pm, Hnahthial sub-deputy commissioner Lalramdintluanga said.

However, only the upper part of the body -- above the waist -- was found, he said.

The body was found by a rescue team engaged by ABCI Infrastructures Pvt Ltd, which was operating the quarry on a lease, he added.

The other rescue teams had retreated from the site recently, the official said.

Islam was operating an earth excavator when the stone quarry caved in at Maudhar village near Hnahthial town on November 14.

A total of 13 people were working at the site when the mishap happened, and 12 of them went missing while one labourer managed to escape unhurt. Eleven bodies were found within a week.

Of the 12 victims, five were from West Bengal, three from Assam, two from Jharkhand, and one each from Tripura and Mizoram, officials said.

Prime Minister Narendra Modi has announced an aid of Rs 2 lakh to the family of each victim, and Rs 50,000 to the injured persons.

Police have filed a criminal case against ABCI Infrastructures.

Hnahthial's Superintendent of Police (SP) Vineet Kumar told PTI that a probe into the case is underway.

A notice has been served to ABCI, seeking an explanation about the incident, he said.