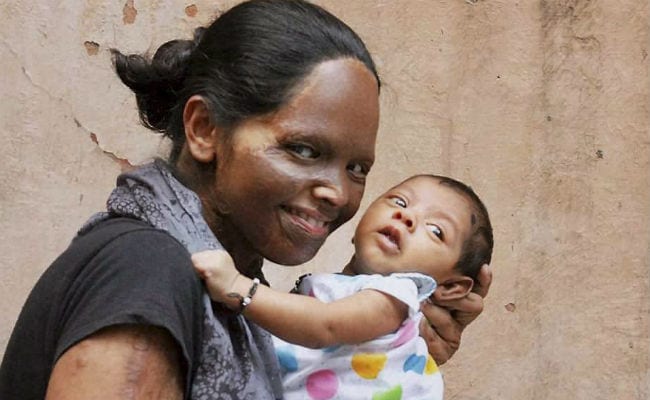 Acid attack survivor and activist Laxmi with her daughter in New Delhi. PTI

New Delhi: Disfigured beyond recognition in a terrible acid attack, 26-year-old Laxmi who goes by a single name has now turned a mother with her partner, a social activist who works for the welfare of acid attack victims.

Laxmi has given her seven-month-old daughter the adorable name 'Pihu' and the baby like her mother will also sport a single name.

For somebody who has been confronted with stares and often times with hostility whenever she appeared in public, finding love and a soulmate seemed to be a hopeless task right up to the time until she met Aloke Dixit, 28, with whom she now runs the Stop Acid Attack Campaign.

The couple, who have been living in together say they wanted some time to introduce their baby to the world.

"For the initial 6 to 7 months we needed time for the baby and also for us. We wanted to relax. Also, because of our busy schedule we were not able to bring 'Pihu' in front of the world. But we finally thought of introducing her to others,"

Laxmi, was attacked with acid in 2005 in a busy marketplace when she was only 16-years-old by a man more than twice her age, whose advances she rejected.

"Laxmi had also gone through a lot of tragedies. She had lost her father and her younger brother very recently. So we did not want people to bombard her with questions and that's why we kept quiet," says Dixit.

Stating that he does not believe in the institution of marriage, Dixit says that the duo do not intend to get married and would continue with their relationship like earlier.

"We do not intend to get married because I do not believe in the institution of marriage. I believe that two people do not need a certificate to remain together in the society. So in the beginning itself we had decided that we are not getting married and would stay together in a live-in relationship, says Dixit.

Born in March, Pihu accompanies her mother everywhere and spends most of her time at the NGO Chaanv, the office of the Stop Acid Attack.

"Pihu does not have a surname, neither would she have one.

We encountered a few problems while making the birth certificate but ultimately it has the name of both the mother and father because both of us are together," says Laxmi.

Hailing from a conservative family, Dixit says he had to face many problems in convincing his parents about the arrangement and that in the end love triumphed.

"I come from a very conservative family and it has not been easy for me to explain my parents about our relationship.

My parents are exactly opposite to us. But gradually they have started accepting, though they fully do not approve of the relationship," says Dixit.

Laxmi recalls that she was very weak when she learnt about her pregnancy. Having undergone several operations to reduce the intensity of the burns Laxmi says he was advised to take proper care of herself along with the child in her womb.

But, says Laxmi there was always an underlying fear about her daughter's response to her appearance.

"I was scared and often used to ask Alok about what would happen if Pihu became scared after seeing my face. But Alok would always support and reassure me," says Laxmi.

Dixit sees in Pihu a ray of hope and encouragement to take their campaign forward.

"I always wanted to reform the education system and had I not been associated with Stop Acid Attack (SAA), I would have been working in the education sector.

"I run a campaign and now that Pihu is here we have got yet another reason to take this campaign forward," says Dixit.

Laxmi had won the International Women of Courage Award in 2014, which was given to her by US First Lady Michelle Obama for her campaign to put an end to acid attacks against women in India.