"Friends: I have liked some tweets. This is happening for the last few days. Do you approve of such tweets? Please RT," the foreign minister tweeted. 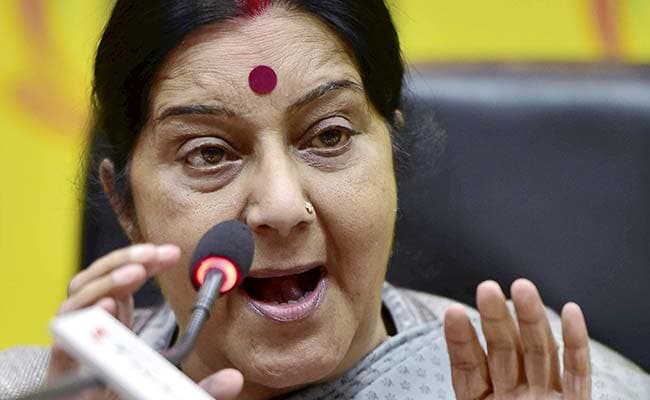 Sushma Swaraj had last week hoped to shame the trolls that flooded her timeline with abuses. (File)

Foreign Minister Sushma Swaraj has been badgered on Twitter for days after an inter-faith couple, allegedly harassed over religion by officials, got their passports after complaining to her on social media.

On Saturday, she marked out about a dozen tweets by "liking" them on Twitter and asked people to vote.

The poll asked if they approved them.

"Friends: I have liked some tweets. This is happening for the last few days. Do you approve of such tweets? Please RT," the foreign minister tweeted.

Friends : I have liked some tweets. This is happening for the last few days. Do you approve of such tweets ? Please RT

Ms Swaraj had last week apparently hoped to shame the trolls that flooded her timeline with abuses, crude comments about her health and communal invectives. She invited people to go through some of the tweets she had received while she was travelling abroad.

This morning, her husband Swaraj Kaushal received another. This one suggested that Mr Kaushal, a former Mizoram Governor, should thrash his wife when she is back from work to teach her a lesson.

A top lawyer, Mr Swaraj called out the author of the abusive tweet, Mukesh Gupta, who claims to be an engineer and has "IIT Delhi" as part of his Twitter handle.

Ms Swaraj was travelling out of the country on an official visit to Europe when Tanvi Seth and Anas Siddiqui, the couple from Noida who had an interfaith marriage, alleged in a series of tweets that they were humiliated and harassed by a passport officer assigned their case at Lucknow.

After a storm on Twitter, the foreign ministry ordered the transfer of the official Vikas Mishra and sent him a notice for an explanation. He told television channels later that he had gone by the rules.

The foreign ministry, which runs passport offices across the country, also gave the couple their new passports the same day.

Of the millions who follow her on Twitter, there were some who saw the ministry's stand from a religious prism and accused her of minority appeasement.

The Congress and several opposition leaders have extended their support to the union minister. But not many top BJP politicians appear to have come forward in her support on social media. In one tweet, Congress leader Abhishek Singhvi complimented her for the grace and dignity with which she had handled the trolls. But her newly-discovered critics have accused her of playing the victim card and floated their own Twitter polls.

Last year, Union Minister Harsh Vardhan too had to hit delete his support of the Supreme Court ban on sale of firecrackers after he was trolled by a section of social media that called the ban "anti-tradition".