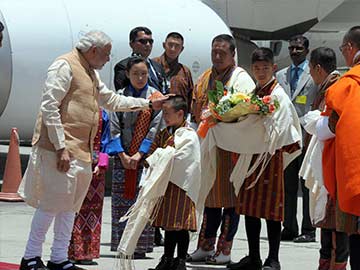 Prime Minister Narendra Modi is welcomed on his arrival at the Paro International Airport in Bhutan on Sunday.

Thimpu, Bhutan: In comments that may be seen as reference to China and Pakistan, Prime Minister Narendra Modi tonight said having a good neighbour is important for a country's happiness and in its absence a nation cannot live in peace despite prosperity.

He made the remarks while reminding Bhutan that one of the factors responsible for its happiness was having a good neighbour like India.

"In the guarantee of happiness, it is important what kind of a neighbour you get. Sometimes you get such a neighbour that inspite of having all the happiness and prosperity, you cannot live in peace," Mr Modi said while speaking at a banquet hosted by Bhutanese Prime Minister Tshering Tobgay.

Though he did not name any country, the comments could be seen as reference to China and Pakistan because of which India has been uneasy despite its economic progress.

On a two-day visit to Bhutan, his first foreign destination since taking over around three weeks back, Mr Modi reassured Bhutan about continued special treatment by India despite the change of government in Delhi.

The assurance assumes significance as China has been trying to win over Bhutan recently.

Mr Modi tonight assured Bhutan that India is committed to its happiness and progress even though the government in Delhi has changed, as he specified areas like peace, security, conservation and tourism for focus of pushing the ties.

Speaking at the banquet, he said India and Bhutan are "made for each other" considering the "glorious" traditional linkages between the two countries.

"I said a while back B to B (Bharat to Bhutan and Bhutan to Bharat), I said it just like that but later I realised that it must be a sign from God that I said this," Mr Modi said.

Referring to Bhutan's unique trait of laying thrust on 'Gross National Happiness' rather than Gross Domestic Product (GDP), Mr Modi said one of the parameters for measuring this could be the consideration that it has a "neighbour like India".

"Bhutan's parameters of happiness, among them, one is having a friend like India. It is an important parameter for happiness. I firmly believe that. Because we know that what are the benefits of neighbours and what are the problems of neighbours. We know it very well. That is why, being a good neighbour is a big reason for happiness and it gives a chance for progress," Mr Modi said.

The Prime Minister underlined that India and Bhutan share not only land boundary but also the "glorious cultural traditions", which makes the relationship unique.

"The colour of our passports may be different but our thinking is the same...India stands committed to Bhutan's happiness and progress," asserted Mr Modi, who chose this country as his first foreign destination to send out a signal about special treatment for it.

"India is with Bhutan, with its success, its happiness, and will continue to be with Bhutan.

Governments might have changed in India, but we need to continue the cultural legacy and to continue tradition of peace and to make relationship between India and Bhutan stronger is our responsibility," Mr Modi said.

"To make them (ties) stronger, we have to change the spectrum of that growth. In a limited spectrum, relationships are made on the basis of 'Rupiya', 'paisa', but there is a lot more to relationships than this," he said.

Mr Modi commended Bhutanese King and the government for ensuring the country's progress despite difficulties and said India will continue to contribute to this.

Promoted
Listen to the latest songs, only on JioSaavn.com
Mr Modi made a mention of the grand reception he got since his arrival in this country this morning. "I will remember this all my life," he said.