A scuffle over the right to play in a playground turned fatal for eight-year-old Aseem, a student of the Darul Uloom Faridiya madrasa in South Delhi's Malviya Nagar.

On Thursday, Aseem and his friends, all of them students, were playing in the madrasa premises when a group of neighbourhood children aged 10-12 years, attacked them. Soon a scuffle broke out and Aseem hit his head against a parked motorcycle and fell unconscious.

CCTV footage of the premises revealed that the fight began with a heated exchange of words followed by violent blows. In the altercation, Aseem was pushed and hit his head. The other students ran to the madrasa to seek help from the cleric. Aseem was rushed to the hospital but succumbed to injuries upon arrival.

"He was such a smart, hard-working and considerate boy. Too early for a young one to die like this. This plot has long been a reason for squabbles but it never got this violent," said cleric Ali Johar.

He added that the madrasa-cum-mosque has repeatedly been vandalised by the land mafia operating in the area, who want to encroach on the vacant land. They often incite neighbourhood children against the residents of the madrasa.

The four accused children were produced before a juvenile justice board and are currently being counselled. However, there is heavy police deployment at the madrasa as there is a fear of communal clashes.

Representing Aseem's parents, advocate Shakeel Akhtar reiterated the need to build a wall built around the madrasa. "The family should be compensated and there must be a safe environment for children who stay here to seek education".

Delhi Chief Minister Arvind Kejriwal has reportedly announced a compensation of Rs 5 lakh for Aseem's family and urged the Delhi police to do its job without any bias.

"Sir, please direct your police to do its job, maintain peace in that area and not to become a stooge of BJP," he tweeted to the Lieutenant Governor of Delhi. 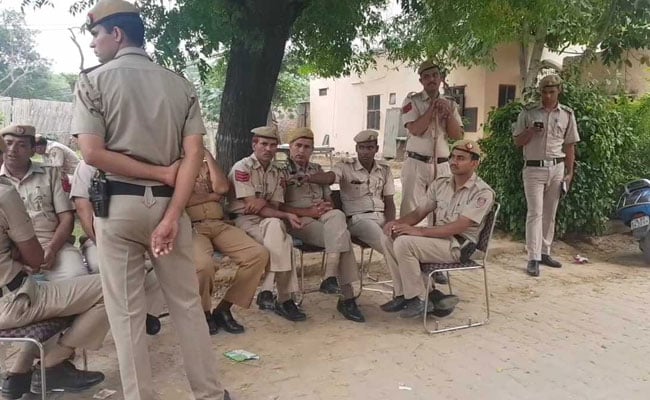 Since Aseem's killing, there is heavy police presence in the area to prevent further violence

"We all are saddened with loss of the life of little friend of 8 yrs old in Madarsa, Begumpur and no money can compensate this irreparable loss of the family but I am thankful to Sri Arvind Kejriwal, Honble CM of Delhi for assisting the family with 5 lacs," he tweeted.

After addressing the residents, he further added, "The Muslim and Hindu brethren present at site unitedly agreed not to allow these vested interest to turn this most unfortunate incident into Hindu-Muslim and people gathered dispersed peacefully. Boy was taken to his hometown in Mewat".