8 Killed In Rain-Related Incidents In Maharashtra

In Mumbai, three persons were killed and five injured in rain-related incidents as the metropolis was lashed by the first spell of heavy rains this monsoon that marked its most delayed arrival in the city in 45 years. 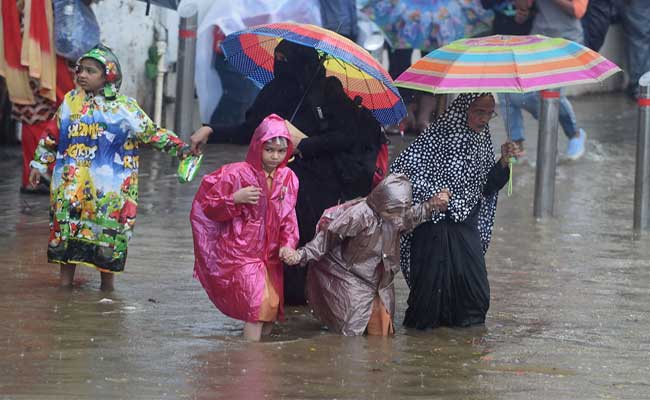 Three people were killed in Mumbai in rain-related incidents

Eight people were killed and five injured in rain-related incidents in Maharashtra where several parts were lashed by heavy rains on Friday, even as dry weather prevailed in northern India.

In the national capital, monsoon is likely to make an onset on July 3, after a delay of four days. Normally, the wind system reaches Delhi around June 29.

"A low pressure area is likely to develop in the Bay of Bengal on June 30 which will cause easterly winds to move towards north India and help the monsoon advance," senior scientist at the India Meteorological Department (IMD) Kuldeep Srivastava said.

"Monsoon is likely to make an onset in the national capital on July 3. Initially, the city will witness only light rain activity," he said.

On Friday, hot and dry conditions prevailed in the national capital, with the mercury crossing the 43-degree Celsius mark in some parts of the city.

The Safdarjung Observatory, which provides official figures for the city, recorded a maximum of 41.5 degrees Celsius and a minimum of 27.2 degrees Celsius. Humidity levels oscillated between 26 and 69 per cent.

The weather stations at Palam, Ayanagar and Sports Complex recorded the mercury at 43.8, 42.9 and 43.4 degrees Celsius.

In Mumbai, three persons were killed and five injured in rain-related incidents as the metropolis was lashed by the first spell of heavy rains this monsoon that marked its most delayed arrival in the city in 45 years.

Three persons died of electric shocks, while two others were injured in two separate incidents in the western suburbs, a spokesperson of the Brihanmumbai Municipal Corporation (BMC) said.

The deceased were identified as Kashima Yudiyar (60), a resident of Andheri (East), Rajendra Yadav (60) and Sanjay Yadav (24) -- both from Goregaon (East), the civic official said.

Two others suffered injuries in the Goregaon incident and were admitted to a local hospital, he said.

Three persons were injured when a portion of a wall collapsed in Dadar (East) amid rains, he said, adding that they were admitted to the civic-run KEM Hospital.

More rains have been forecast in the next 24 hours.

Till 4 pm on June 28, the Colaba observatory had recorded 19.2 mm rain and the Santacruz observatory 138 mm rain, the BMC said.

In Palghar in Maharashtra, an eight-year-old boy died after being struck by lightning while two farm labourers were killed in Akola. Two persons, including a teenage girl, were killed in rain-related incidents in Nashik district which was lashed by heavy showers for the fourth consecutive day.

Several parts of eastern and central India, including Bihar,West Bengal, Madhya Pradesh and Odisha, the Northeast and coastal areas were lashed by heavy rains with some places recording very heavy rains, according to the IMD.

In Chennai, which has been reeling under water crisis, a host of measures such as rainwater harvesting and increasing the number of trips by tankers have been taken to mitigate the crisis city.

From around 9,000 trips, the number has gone up to 11,360 trips every day, Rural and Municipal Administration Minister SP Velumani said, adding "it was never done before."

Heat wave conditions intensified in Jammu as the maximum temperature settled at 42.4 degrees Celsius, 4.7 notches above the season's average, and the highest in the last two weeks, a meteorological (MeT) department official said.

The maximum temperature in the city marked an increase of 2.4 notches compared to previous days 40.2 degrees Celsius, forcing many to remain indoors.

Jammu and Kashmir's summer capital Srinagar, on the other hand, continued to experience pleasant weather as the mercury recorded a dip following rain which lasted for several hours on Thursday evening.

Parts of Rajasthan recorded rainfall ranging from 2 to 8 cm in the last 24 hours, a MeT official said.

Despite receiving 0.8 mm rainfall, Churu was the hottest place in the state recording a maximum temperature of 44.3 degree Celsius.

Rain or thundershower is very likely at isolated places over the state on Jun 29, according to the MeT office.

Heat wave condition is very likely to prevail at isolated places over eastern Uttar Pradesh on June 29. Banda was the hottest place in UP at 44.2 degrees Celsius.

Most parts of Haryana and Punjab recorded maximum temperatures above the normal limits with Amritsar being the hottest place in both the state at 42 degrees Celsius.