P Sivakumar, field director of the national park, said 3 hog deer died in accidents, one drowned and a swamp deer is suspected to have been hunted 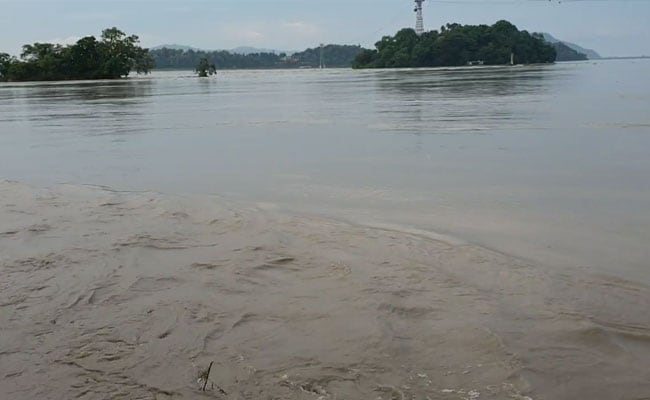 Many animals, including one-horn rhinos, have moved to higher areas due to the flood. File

With the Brahmaputra flowing above the danger mark, floodwaters have entered Assam's Kaziranga National Park yet again and five animals have died as they tried to move to higher areas to escape the flood.

P Sivakumar, field director of the national park, said 70 per cent area of the park has been affected due to the flood.

"Three hog deer were hit by speeding vehicles while they were crossing the road on their way to higher areas. One hog deer drowned and a swamp deer was found dead near the boundary of the park at Sildubi Gaon today morning," he said.

Mr Sivakumar said the post-mortem has confirmed that the swamp deer was hunted down as it was leaving the park to move to higher areas. "The animal was killed by using sharp spears while it was coming out of the park at night. A case is being registered and we have initiated an investigation."

With large parts of the national park submerged, many animals, including one-horn rhinos, have taken shelter in highlands inside the park.

"Out of 223 camps, 125 camps are inundated. No rescue operation has been started yet but if it is required, forest guards are ready. Our forest team is monitoring every activity in the park to thwart any poaching attempt," said Mr Sivakumar.

Movement of heavy vehicles has now been barred on National Highway-715, which passes through the national park. Chief Minister Dr Himanta Biswa Sarma has appealed to people to avoid taking the highway.

"We all take pride in Kaziranga National Park. In wake of floods causing displacement of Kaziranga animals & putting them on risk, may I appeal to truck /other vehicles to avoid NH 715 for commuting between lower & upper Assam & use NH 15 thru North Bank instead?," he tweeted. In another tweet tagging police authorities, he directed that traffic be diverted accordingly.

About 90 per cent of the national park was flooded last year and over 150 animals died -- some drowned while others were killed in accidents on highways.

Meanwhile, the flood situation in Assam has turned worse with about 3.63 lakh people across 21 districts affected. Two deaths have been reported over the past 24 hours. As many as 950 villages are inundated and over 16,000 people have been shifted to relief camps.