7 Dead, 3 Rescued After Avalanche In Jammu And Kashmir's Kulgam

Frequent road closures due to the avalanche have also led to a massive shortage of essential supplies in Kashmir.

About 20 people were inside the police post when it was hit by the avalanche in Kulgam. (PTI)

A day after a massive avalanche hit a police post near the Jawahar Tunnel along the Srinagar-Jammu National Highway, rescuers on Friday found three survivors and recovered seven bodies buried under mounds of snow and debris of a destroyed police post.

For rescuers looking for one missing policeman, high-velocity icy winds posed a huge challenge. A local resident who was part of the rescue operation said they tried their best to save trapped people after the police post was completely destroyed.

About 20 people were inside the police post when it was hit by the avalanche on Thursday evening.

Mohammad Maqbool, a policeman and one of the survivors, said that he was trapped inside a room along two other personnel and had to break the door open to come out.

With heavy snowfall closing the highway, thousands of truckers are stranded without food or money. A few good Samaritans have come to their rescue. "We are very grateful to locals here. We had no food and money. They have been giving us free food," a truck driver said. 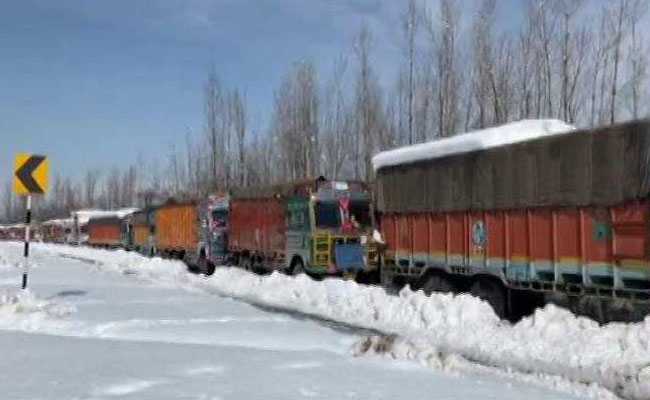 Thousands of truckers are stranded without food or money after the avalanche in Kashmir.

Sohan Lal, a trucker stranded in Qazigund for last 20 days says he has been able to survive the harsh weather only because of help from locals.

Frequent road closures have also led to a massive shortage of essential supplies in Kashmir. The government has now ordered rationing of fuel. Petrol pumps have been asked not to give more than three litres of petrol. The NH-44, the only road link that connects Kashmir with the rest of country, is still shut. It's a long wait for truckers and other travellers. Officials are still not sure when the roads will open.

However, flights resumed from the Srinagar airport today as weather conditions improved slightly.

avalancheavalanche in jammu and kashmir

From Chirag Paswan, A Countermove: A New Chief For LJP's Bihar Unit