According to regularly updated figures on the Ujjwala website, the biggest beneficiary states include Uttar Pradesh with 90 lakh connections, and West Bengal and Bihar with 63.5 lakh connections each 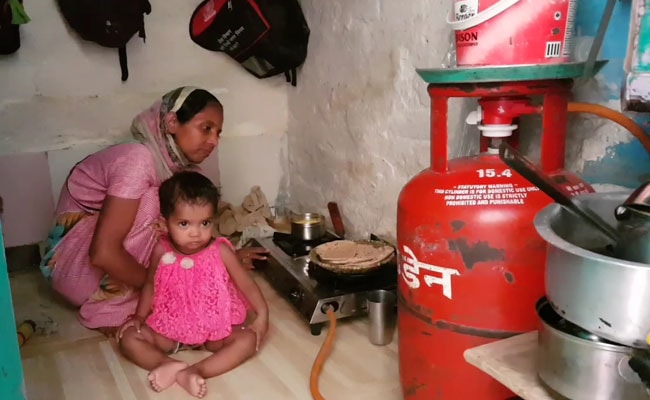 At an average of Rs 800 a cylinder, cylinder refills may be too expensive for BPL families.

The Pradhan Mantri Ujjwala Yojana, a clean cooking gas initiative, has been a roaring success, the government has claimed. The centre says that it has managed to provide five crore LPG connections in 26 months, well before the deadline of May 2019. Looking at the speed at which connections have been disbursed, the programme's goal has been scaled up to eight crore connections by 2020.

The benefits of the scheme are showing on the ground. In Delhi's Lal Gumbad colony, 29-year-old Sushila is thrilled with her newest acquisition, an LPG cylinder and a stove, thanks to the Ujjwala Yojana. Earlier, she cooked outdoors for her family of five because the mini cylinder she used would heat up her small home. Cooking food would also take a long time.

Though the scheme is relatively new to Delhi, the capital has seen over 50,000 connections since April this year. According to regularly updated figures on the Ujjwala website, the biggest beneficiary states include Uttar Pradesh with 90 lakh connections, and West Bengal and Bihar with 63.5 lakh connections each. Under the scheme, a subsidy of Rs 1,600 is provided to below poverty line (BPL) families, which can be used to get a free cylinder and connection, or in monthly installments for a stove.

Though the scheme claims five crore connections, 1.4 crore connections were distributed under similar initiatives of the UPA, the numbers of which were subsumed under Ujjwala. That still leaves the impressive number of 3.6 crore connections in 26 months at an unprecedented pace. The connections can have a wide-ranging impact. Last year, a study in the medical journal Lancet found that the biggest pollutant killer in India was household pollution, which took 1.24 lakh lives in a year. Burning solid fuels for cooking causes heavy smoke in closed spaces, which can be extremely hazardous for those present.

The government has cited the scheme as one of its key successes.

"If we were giving LPG connections to poor mothers to save them from smoke in the kitchen at the speed of 2013, even 100 years would not have been enough," said Prime Minister Narendra Modi in his Independence Day address.

However, experts have raised questions if this freedom from smoke is really permanent. Ujjwala beneficiary Ramlali's free cylinder came two weeks ago. Though she is among only a handful of women to get the cylinder in her colony, she isn't sure she can continue.

"I am happy now but we will see about the future. How much are they charging, will it be free, or will they take money?" she said. "I have six kids, it will be hard."

At an average of Rs 800 a cylinder, cylinder refills may be too expensive for BPL families. While the number of new connections is regularly updated on the Ujjwala website, the government is not collecting data on how many Ujjwala connections are actually leading to a permanent switch to clean fuel.

Analysing official data by the Ministry of Petroleum and Natural Gas, a study by the energy NGO Prayas found that the average LPG consumption per month has dipped sharply in the country. Ujjwala beneficiaries are using even lesser LPG on average, at 35 to 50% of expected consumption.

In addition, 15% of LPG connections are "inactive" which means that 3 of 20 registered users are not buying refills. As many as 35% users are inactive in Chandigarh, 27% in Delhi, and 20% in Andhra Pradesh. And yet, states like Himachal Pradesh, Punjab and Uttar Pradesh have shown LPG coverage of over 150%. This indicates that households may not be using their connections for cooking.

The Ujjwala Yojana collects state-wise data on the number of connections disbursed, but it has not collected district-wise data or tracked how many beneficiaries are actually going for refills. Experts say it is crucial for the government to collect and analyse this data to make important mid-course connections in the scheme.