Among eight persons arrested till now are four Afghan nationals, an Uzbekistan national, and three Indians. 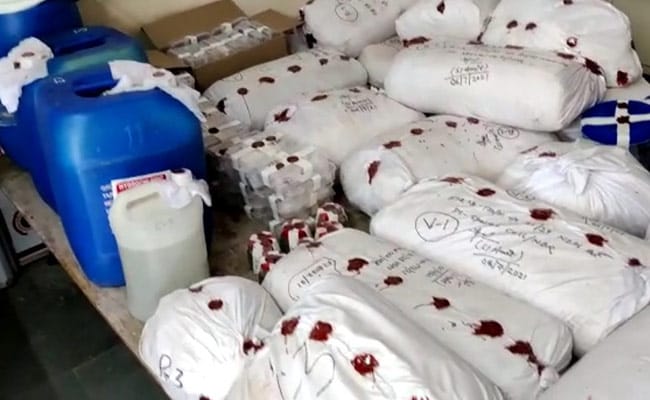 The suspected illegal drugs were recovered from Delhi and nearby Noida.

The Directorate of Revenue Intelligence has, since the seizure of close to 3,000 kilograms of heroin at Gujarat's Mundra port two weeks ago, recovered around 37 kilograms of the narcotic drug, along with cocaine -- or substance suspected to be the contraband items -- from Delhi and Noida in Uttar Pradesh. Up to eight persons, including Afghan and Uzbekistan nationals, have been arrested in this connection.

In the containers seized at the Gujarat port, run by the Adani Group, heroin was concealed in jumbo bags said to contain unprocessed talc powder, a Press Information Bureau release said today. The drug was placed in the lower layers of the bags and then topped with talc stones to avoid detection.

As a result, the heroin had to be painstakingly separated from the talc stones, the release said.

"A total of eight persons, including four Afghan nationals, one Uzbek National, and three Indian nationals have been arrested in the case so far. The arrested Indian nationals include the holder of the import export code (IEC), which was used to import the consignment. He was arrested from Chennai. Investigations are in progress."

The Enforcement Directorate has earlier initiated a money-laundering probe into the September 13 seizure valued at around Rs 20,000 crore.

The Andhra Pradesh duo arrested in this connection is likely to have been unaware of the contents of the container, sources in investigative agencies have said, referring to the husband and wife as "name lenders".

The Adani Group has, meanwhile, said policing and examining containers was not its responsibility.