Among those expelled are Bhagalpur RJD president Tirupati Nath Yadav, youth leader Miraj Chand and Shahjada, read a statement from the party. 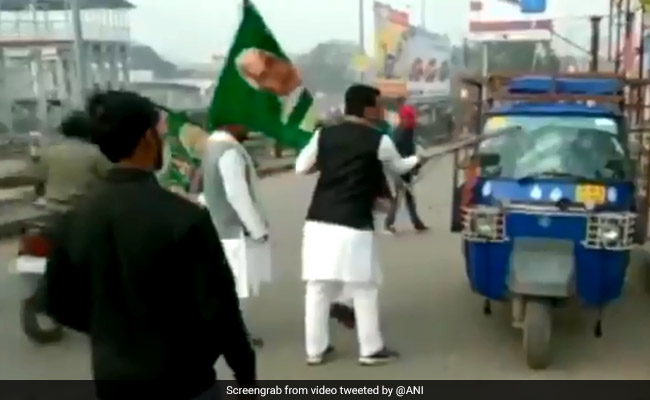 In Bhagalpur, many auto-rickshaws were vandalised during the anti-CAA stir.

The Rashtriya Janata Dal (RJD), which had called for a ''bandh'' in Bihar against the Citizenship (Amendment) Act, 2019, has expelled three people from the party for vandalising an auto-rickshaw in Bhagalpur by going against the order of the party leadership.

Among those expelled are Bhagalpur RJD president Tirupati Nath Yadav, youth leader Miraj Chand and Shahjada, read a statement from the party.

As many as 13 people were arrested and 1,550 were taken into preventive custody in 38 districts in connection with the RJD sponsored ''Bihar bandh'' on Saturday, the police said.

"As per the compiled information from 38 districts in connection with today''s ''Bihar bandh'' called by RJD-led alliance, 1,550 people were taken into preventive custody," ADG Jitendra Kumar said.

#WATCH RJD workers vandalise auto rickshaws in Bhagalpur during 'bandh' called by the party against Citizenship Act and National Register of Citizens. #Biharpic.twitter.com/d2sbDcdlA2

He said that 14 cases were registered and 13 people were arrested in connection with the protests, adding that road and rail routes were interrupted at some places.

The ''bandh'' turned violent at some places with demonstrators going on a rampage.

In Munger, protesters destroyed local shops, vandalised a police station and raised slogans denouncing the citizenship law and the National Register of Citizens (NRC). In Patna, protesters broke police barricades and blocked a road during a demonstration.

In Bhagalpur, many auto-rickshaws were vandalised during the anti-CAA stir.

Bihar Chief Minister Nitish Kumar on Friday announced that the National Register of Citizens will not be implemented in the state.