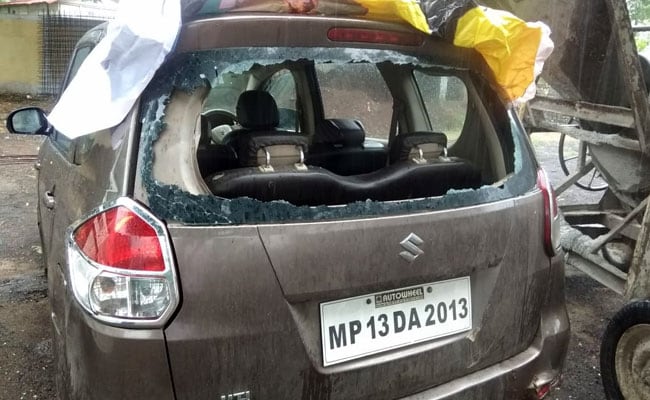 Three Congress leaders were thrashed by a mob after they were mistaken as child kidnappers at a village in Madhya Pradesh, the police said.

The mob had blocked the main road using fallen trees over rumours that a gang that kidnapped children was prowling at Navalsinh village in Madhya Pradesh's Betul district on Thursday night.

The three local Congress leaders - Dharmendra Shukla, Dharmu Singh Lanjiwar and Lalit Baraskar - were travelling in a car when they saw the barricade at night. They turned around, assuming some highway robbers were waiting to ambush them, the police said.

The villagers chased them and in no time surrounded them and damaged the vehicle. They were taken out and thrashed by the mob, the police said.

"Suspecting them to be child kidnapers, the villagers chased the vehicle and attacked it. The vehicle was damaged. They also assaulted the three Congress leaders. A case has been filed with the Betul police and investigation is on," said senior police officer Ram Snehi Mishra.

A dozen cases of mob attacks on people suspected of kidnapping children have been reported from across Madhya Pradesh in the past week.

Three suspected cases were reported from Betul, the same district where the Congress leaders where thrashed. Other cases have also been reported from Indore, Bhopal, Hoshangabad, Sehore, Neemuch, Raisen and Dewas.

In Dewas, timely police action prevented a differently abled woman from being lynched on suspicion of being a child kidnapped Saturday. The police said a middle-aged man who was found dead last week in Raisen district is being seen as a suspected case of lynching over rumours of child kidnapping.

In July and August 2018, two differently abled man and a woman were lynched in Singrauli and Dindori districts, respectively, on suspicion of kidnapping children.

In July last year, a WhatsApp video wrongly identifying a Hyderabad techie as a child kidnapper led to his lynching near Bidar kin Karnataka.

In the recently concluded budget session of the Madhya Pradesh assembly, the opposition BJP's lawmakers had condemned rising cases of lynching in the state.

Former chief minister Shivraj Singh Chouhan and BJP lawmakers had questioned the Kamal Nath government why it brought a bill seeking punishment to those who kill in the name of cow protection, but not other lynching over other reasons.