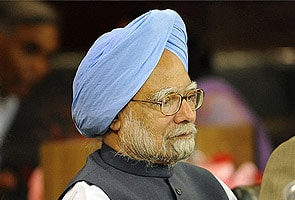 New Delhi: The Supreme Court is hearing the affidavit filed on behalf of Prime Minister Manmohan Singh which rejected the charge of inaction on the part of his office in dealing with the request of sanction for prosecution of former Telecom Minister A Raja in the 2G spectrum issue. (Read and watch: Government files affidavit on PM's behalf).

The affidavit was asked for by the Supreme Court stating that there was an alleged inaction on his part in responding to letters written by Janata Party president Subramanian Swamy.

In court today, Attorney General G E Vahanvati who represents the PM in the case said, "The question of granting sanction does not arise as there was no complaint. Sanction is to be granted only when a court takes cognizance of an offence and wants to initiate proceedings against an accused."

"The petitioner could have filed a complaint. There's no provision in law for seeking sanction for filing a complaint,' he added.

Arguing that the PM was not at fault, Swamy said, ""The PM never had any mala fide intent, he never deliberately delayed filing a reply. He doesn't know law. He should've been advised correctly. It's his bureaucrats and the Law Ministry who are to blame," said Swamy.

Here are some excerpts from the affidavit;

I'm making this affidavit only for the purpose of showing how the various letters received from the petitioner have been duly considered.

On December 1, 2008, the PM pursued the letter (Swamy's letter) and noted "Please examine and let me know the facts of this case." This was marked to the Principal Secretary to the PM who in turn marked it to the Secretary. The Secretary marked it to me as Director in the PMO.

It is specifically mentioned in paragraph 2 of the letter dated October 31, 2009 of Shri Swamy that an FIR was registered by the CBI and "the substance of the allegation made by me in the above cited letters to you are already under investigation."

On February 9, 2010, I prepared another note placing on record the advice from the Department of Legal Affairs. I stated that according to the advice, the decision of granting sanction for prosecution may be determined only after perusal of the evidence collected by the investigating agency, the CBI and other materials to be provided to the competent authority. (Read full text of the Affidavit)

Promoted
Listen to the latest songs, only on JioSaavn.com
Earlier, the top court had termed PM's alleged silence and inaction as worrying, remarks that led to a change in the PM's legal team. The Solicitor General made way for the Attorney General to defend the PM.

Meanwhile, Swamy has also said that his real target was the law ministry and babus for wrongly advising the Prime Minister to wait for evidence before deciding on sanction to prosecute the former Telecom Minister in the 2G spectrum case.