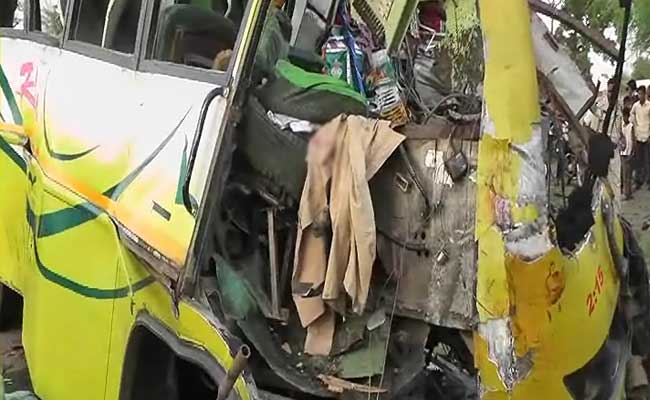 A private bus carrying 38 passengers collided head-on with a truck on the Khandwa-Indore road on Wednesday.

Khandwa, Madhya Pradesh: At least twenty-five persons, including four women, were killed and 19 others injured when the bus in which they were travelling collided with a truck near Choti Chhaegaon Makhan area in Khandwa on Wednesday.

The incident occurred when the private bus, carrying 38 passengers, collided head-on with a truck on the Khandwa-Indore road, Khandwa Superintendent of police MS Sikarwar told Press Trust of India.

The bus was on its way to Khandwa from Indore while the truck was heading towards Indore, Mr Sikarwar said, adding, at the time of the collision both the vehicles were moving at a high speed.

The injured were rushed to the district hospital.

Mr Sikarwar and District collector Mahesh Agrawal reached the hospital soon after the accident. Meanwhile, Madhya Pradesh Chief Minister Shivraj Singh Chouhan announced an ex-gratia of Rs 1.5 lakh to the kin of the victims and Rs 50,000 to the persons injured.

An investigation has been initiated into matter.