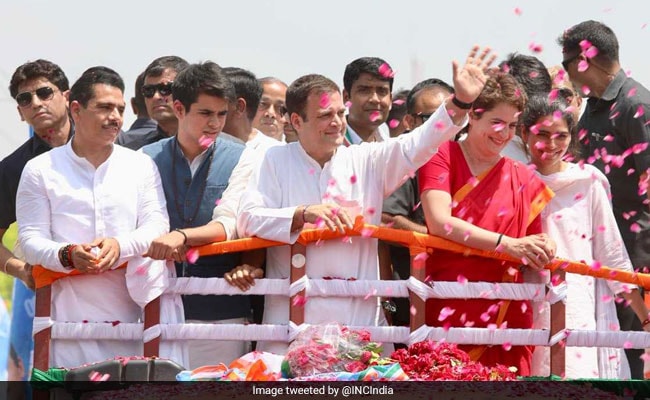 Charges are flying fast and thick in the midst of election campaigning for Lok Sabha polls that begin on April 11, with political leaders addressing various rallies in different states. Prime Minister Narendra Modi has addressed a public rally in Gujarat. He will soon address another rally in Goa today. Congress chief Rahul Gandhi held a road show in Uttar Pradesh's Amethi before filing his nomination papers at the Collectorate Office.

Here are the LIVE updates on Lok Sabha Elections: 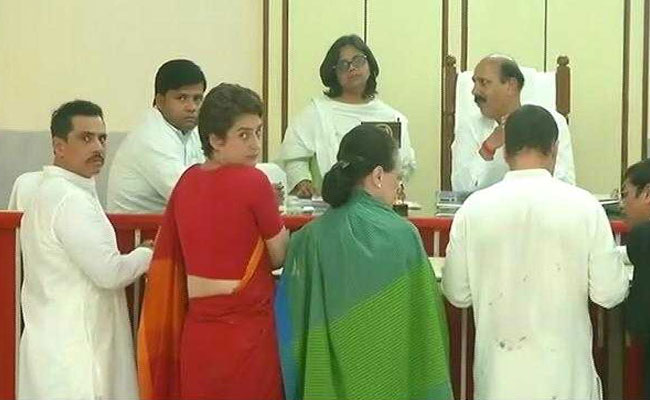 Apr 10, 2019 12:41 (IST)
Karnataka chief minister HD Kumaraswamy campaigns for his son and party's candidate for Mandya Lok Sabha constituency Nikhil, reports news agency ANI.
Apr 10, 2019 12:35 (IST)
Sonia Gandhi arrives at District Collector office in Amethi, where Congress President Rahul Gandhi will file his nomination, reports news agency ANI.
Apr 10, 2019 12:34 (IST)
Gurjar leader Kirori Singh Bainsla and his son Vijay Bainsla join Bharatiya Janata Party in the presence of Union Minister Prakash Javadekar.
Apr 10, 2019 12:05 (IST)
Congress chief Rahul Gandhi holds a road show in Amethi, Uttar Pradesh. He is accompanied by his sister Priyanka Gandhi.
Apr 10, 2019 11:57 (IST)
Airstrike was against Pakistan, but affected Congress in India, says PM Modi.
Congress used all abusive words in dictionary against "your son, your chowkidar", he adds.
Apr 10, 2019 11:53 (IST)
Gurjar leader Kirori Singh Bainsla to join Bharatiya Janata Party today.
Apr 10, 2019 11:50 (IST)
"In last 3-4 days you would have seen sacks full of cash of the Congress leaders being found. It has not been even 6 months of government in Madhya Pradesh. The Congress had turned Karnataka into their ATM now they have turned Madhya Pradesh into an ATM. Fate of Rajasthan and Chhattisgarh won't be any different," says PM Modi.
The Income Tax Department recently conducted raids on close aides of Madhya Pradesh Chief Minister and Congress leader Kamal Nath and others in four states.
Apr 10, 2019 11:26 (IST)
"Congress has snatched away food from poor children, snatched away their meal and is filling the stomach of its own leaders. Congress is looting the money designated for pregnant women," says PM Modi.
Apr 10, 2019 11:18 (IST)
The Shiv Sena hails the BJP's manifesto and gives it "200 out of 100" marks for promising to scrap Article 370 of the Constitution, providing special status to Jammu and Kashmir, and construction of Ram temple in Ayodhya. The Sena, an ally of the BJP at the Centre and in Maharashtra, says the country's integrity cannot be compromised and that 2019 is the last chance to construct the Ram temple.
Apr 10, 2019 11:16 (IST)
PM Narendra Modi is addressing a public meeting in Junagarh, Gujarat.
"I have come here to give you an account of the work done in five years. I have come here to take your order for the next 5 years. Are you proud of the work done by your son, this chowkidaar?  Are you proud that there is not a single blot of corruption?" he asks.
Congress comes in power only to loot money, says PM Modi. "A new name has been added to the list of corruption by Congress. Congress' identity is linked to corruption under many names. But now a new scam, along with evidence, has been added to the account of Congress leaders -- Tughlaq Road Chunavi Ghotala."
Apr 10, 2019 11:15 (IST)
Congress spokesperson Randeep Singh Surjewala says: "Pak has officially allied with Modi! A vote for Modi is a vote for Pakistan!"
His tweet comes after Pakistan Prime Minister Imran Khan said he thinks there may be a better chance of peace talks with India if PM Narendra Modi's BJP wins the general election.
Apr 10, 2019 10:48 (IST)
The Election Commission (EC) has issued show cause notices to producers of two TV serials following allegations that the shows were violating the model code of conduct by promoting various government schemes. Maharashtra's additional chief electoral officer Dilip Shinde says complaints were received of violation of the poll code by two serials being aired on Zee TV and &TV.
Apr 10, 2019 10:42 (IST)
Congress President Rahul Gandhi arrives in Amethi. He will file his nomination for Lok Sabha Elections 2019 from the Lok Sabha constituency today.
Apr 10, 2019 10:27 (IST)
National Conference (NC) leader and former Jammu and Kashmir Chief Minister Omar Abdullah tweets: "Just imagine what all the "Chowkidar" handles would be doing to Rahul Gandhi and the Congress right now if Imran Khan had endorsed RG as PM in these elections? Who is the "tukde tukde" gang now?"
Apr 10, 2019 10:25 (IST)
The stage is set for polling in 91 Lok Sabha constituencies across 20 states and Union Territories on Thursday in the first of seven-phased polls to elect a new government at the Centre. Voting for Assembly polls will also be held in Andhra Pradesh, Sikkim, Arunachal Pradesh and the first phase of Odisha.
Apr 10, 2019 10:24 (IST)
Senior Congress leader P Chidambaram takes a swipe at the PM Modi-led government, charging that in this regime conviction comes first and investigation later and a person is guilty until proven innocent. He says the law secretary should "teach" the Prime Minister some basic lessons in law as the Supreme Court has said that bail is the rule and jail the exception.