11 New Languages in Android Next Month, Including Gujarati: Sundar Pichai 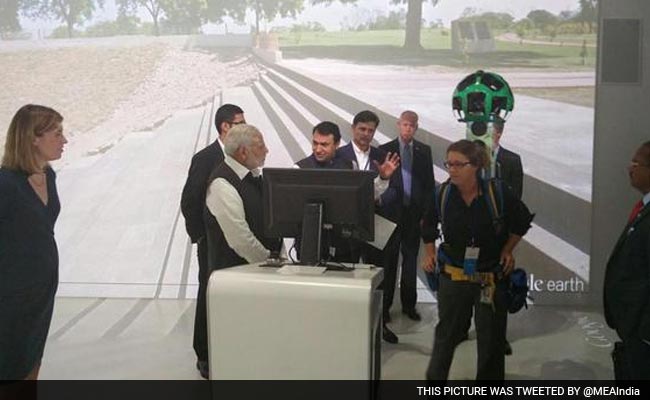 Prime Minister Narendra Modi being given a tour at Googleplex.

"India was the first country where Chrome was the number one browser," Mr Pichai said in his introductory remarks before PM Modi's address. "I grew up in India and saw the transformation of technology."

Mr Pichai -- who said he shared PM Modi's dream of Digital India and wanted to take part in it -- also announced that Google would partner with the Indian Railways to provide wireless Internet or WiFi at 100 railway stations across India. The number will be increased to 400 next year.

Recalling his young days when he used to travel by train from Chennai to Kharagpur, Mr Pichai noted that every day, 25 million people ride the Indian Railways which has 7,500 stations and pointed out that its length is twice the distance between the Earth and the Moon.

The Prime Minister was given a tour of the Googleplex, as the headquarters is referred to, where he was shown the most forward-looking researches being done by the search engine giant.

These included the Google Earth, the Project Iris, a smart lens that measure glucose levels, and Hackathon - a15-hour software coding session for apps with around 150 Indian programmers.

"For 15 hours you are sitting at your computers finding solutions to problems. This Hackathon culture should be encouraged in India," the Prime Minister later said in his brief address.

As Mr Pichai explained the navigational, safety and other uses of Street View and Google Earth, PM Modi asked the employees to pinpoint Khagaul, a place near Patna where the great ancient astronomer, Aryabhatta, had an observatory.

"Sometimes I say in jest technology was meant to save time," the Prime Minister said. "But what happened was just the opposite. Today people spend most time on technology. When a child asks for milk, his mother says wait have to send a Whatsapp," he added as the audience cheered.

"Technology has become a huge power for democracy. And I can see the benefits of this technology through the Narendra Modi app," he said.