11 Fishermen Stranded Off Odisha Coast Due To Cyclone Asani Rescued

The fishermen had gone to Visakhapatnam to buy a fishing boat, and on their return were stuck in the sea as the boat developed technical glitches. 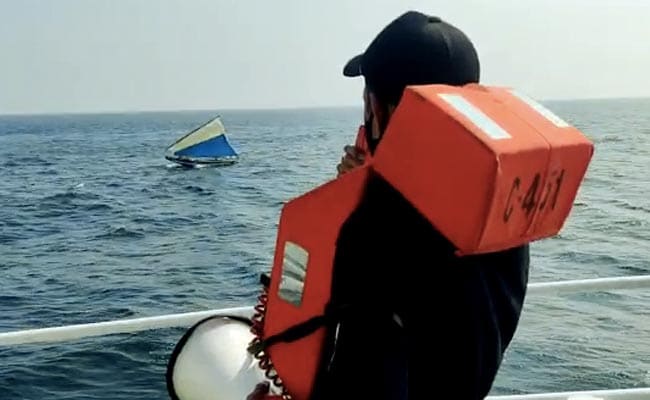 The 11 fishermen were stranded at sea since 9AM on Monday. (Representational)

At least 11 fishermen from Odisha, who were stranded for around eight hours in the rough sea due to the raging severe cyclone Asani, were rescued on Monday with help of the Indian Coast Guard, an official said.

The fishermen had on May 7 gone to Andhra Pradesh's Visakhapatnam to buy a fishing boat, and on their return were stuck in the sea around 4-5 km off the coast near Sonaput in Ganjam district as their newly-bought vessel developed some technical glitches, the official said.

The fishermen, who were identified as residents of Markandi village under the Rangelunda block of the district, were stranded in the sea since 9 am of Monday before they were rescued, Odisha's Special Relief Commissioner (SRC) P K Jena said.

"They were trapped in the rough Bay of Bengal from 9 am and were not able to sail due to high tide under the impact of cyclone Asani. The Ganjam district administration swung into action as soon as it got the information about the technical glitches in the fishing boat and subsequently, the SRC office coordinated with the Coast Guard DIG at Paradip to launch the rescue operation. A chopper was deployed," he told reporters here.

Ganjam district sub-collector V Kirtivvasan, who monitored the rescue operation, said, "The Indian Coast Guard team first made an attempt to rescue the trapped fishermen by using a vessel, but failed. They deployed a chopper to rescue them." Ananat, one of the 11 rescued fishermen, claimed that they had gone to Visakhapatnam before the district administration issued a warning of the cyclonic storm.

Another rescued fisherman B Jogeshu said, "We were supposed to reach the Odisha coast at around 1 pm but the boat developed a technical snag and we could not move because of high tide."

Meanwhile, the meteorological department said severe cyclone Asani is moving towards the east coast bringing along heavy rain and is likely to recurve in a north-northeastward direction on reaching near the shore and weaken gradually into a cyclonic storm.

Coming close to north Andhra Pradesh-Odisha coasts, it is likely to turn into a cyclonic storm by Tuesday night.