Donald Trump's India visit: The crowd estimate by the Ahmedabad Municipal Commissioner is much less than the one claimed by US President Donald Trump in a press conference 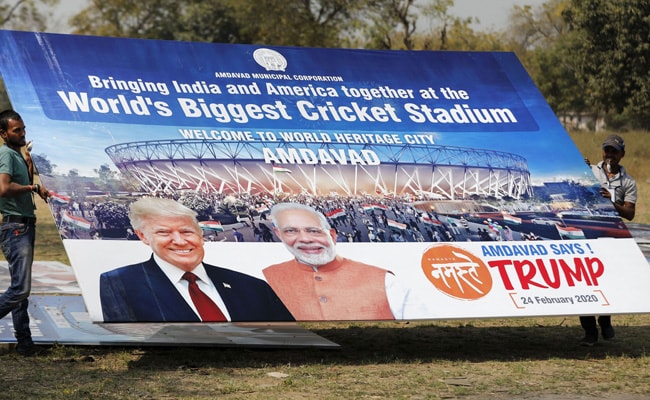 Around one lakh people, not seven million as claimed by US President Donald Trump, are expected to turn up to see the American President along a 22-km-long road in Ahmedabad after he lands in India, the city's Municipal Commissioner Vijay Nehra said today, news agency Press Trust of India reported.

Prime Minister Narendra Modi and President Trump will travel on this road on February 24.

The crowd estimate by the Municipal Commissioner is much less than the one claimed by President Trump in a press conference. "We're not treated very well by India, but I happen to like Prime Minister Modi a lot. And he told me we'll have 7 million (70 lakh) people between the airport and the event," Mr Trump said, referring to the roadshow ahead of a "Namaste Trump" rally in Ahmedabad.

To put the number in perspective, the population of Ahmedabad, one of the major cities in Gujarat, is 70-80 lakh.

The stadium event in Ahmedabad is being seen as an Indian reciprocity to the "Howdy, Modi!" event in Houston in September last year, when a 50,000-strong crowd greeted PM Modi as he shared the stage with the American President.

The 'Howdy, Modi!' event gave PM Modi a chance to energise his relationship with Indian-Americans who are active political supporters. President Trump faced a largely foreign-born audience and he had a strong political reason for coming at the event - Houston is a rare Democratic stronghold in Republican-dominated Texas and serves as the economic anchor of a state that will be critical to President Trump's re-election bid.

During President Trump's two-day visit to India, the two nations are expected to sign a number of trade deals, but a big-ticket signing is unlikely, according to reports. "Well, we can have a trade deal with India, but I'm really saving the big deal for later on," President Trump told reporters on Tuesday as he left the White House for a trip to California.