In the last municipal election, the BJP won just four seats, while the TRS claimed 99 to sweep to a supremely comfortable win

At a rally ahead of next week's Hyderabad municipal election, Uttar Pradesh Chief Minister Yogi Adityanath - one of an army of A-listers unleashed by the BJP in its bid to win voters in the southern state - blamed the "nefarious alliance" of the ruling TRS and Asaduddin Owaisi's AIMIM for the lack of development and declared the BJP could rename the city to Bhagyanagar if it won.

Making his pitch in a civic poll - where the focus is normally on infrastructure - the Chief Minister also drew from the BJP's tried-and-tested election playbook, a page of which was earlier read out by Karnataka MP Tejasvi Surya when he called Mr Owaisi an "avatar of Mohammad Ali Jinnah".

"In Bihar a newly-elected MLA of AIMIM declined to say "Hindustan" during oath-taking. They will live in Hindustan but when it comes to taking oath in the name of Hindustan, they hesitate," he said, speaking at Lal Darwaza in the Old City, which is seen as a stronghold of Mr Owaisi's party.

According to news agency ANI, the MLA in question - Akhtarul Iman - had sought clarification on the wording of the oath, noting that the Constitution refers to "Bharat".

"I wanted to know whether it's okay to say "Hindustan" or shall I say "Bharat"... We are lawmakers, we should place the Constitution above all," Mr Iman said.

Though this poll involves electing a mayor, and the pertinent issues are supply of water, power and electricity to the city's nearly 10 million people, the campaign has swirled around controversial comments on allegations of Rohingya infiltrators and a Hindu-Muslim narrative.

The police have red-flagged such comments, saying political speeches will be monitored and action will be taken against anything found inflammatory.

Telangana Chief Minister K Chandrashekar Rao, or KCR, who also held a rally on Saturday, hit out at the "outsiders" and urged voters to "save this city". 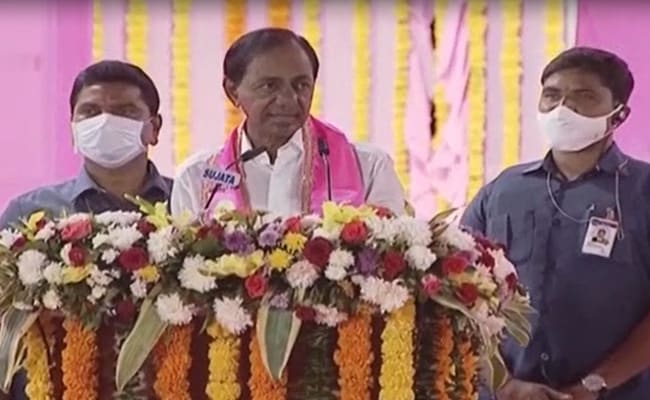 "I plead with you to save this city. Only if it is a peaceful city, can business and economy prosper. I appeal to all sections," he said, reiterating his appeals from this week.

On Saturday, Adityanath held a massive roadshow through Hyderabad's Malkajgiri constituency, which saw dancers from the cultural traditions of Andhra Pradesh and Telangana (the two Telugu states), as well as Kerala, Punjab, Rajasthan and UP, entertain the crowds.

He stood aboard a makeshift platform on a bus, with state BJP chief and Karimnagar MP Bandi Sanjay on his right, as the vehicle inched past a sea of saffron in the city's Jeedimetla area.

Boosted by its victory in an Assembly bypoll for the Dubbaka seat earlier this month, the BJP has targeted this Hyderabad election as a chance to carve out a space for itself in the southern state.

In the last municipal election, the BJP won just four seats, while the TRS claimed 99 to sweep to a supremely comfortable win.

Voting for the 150 wards will be held on December 1, with results due December 4.