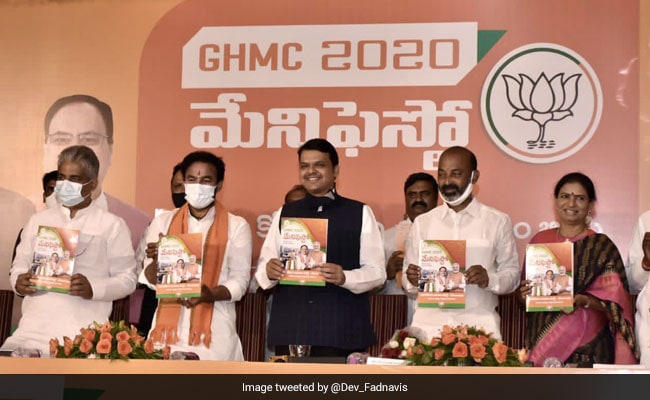 The BJP today promised financial assistance of Rs 25,000 for each family affected by the recent rains in the city, free electricity to families which consume less than 100 units and free travel for women in city buses and metro trains among others, in its manifesto for the civic polls in Hyderabad.

The manifesto, released by former Maharashtra Chief Minister Devendra Fadnavis, said COVID-19 vaccine would be provided to all as per the suggestions of the Centre.

It said an effective plan would be prepared to control the spread of COVID-19 in the city which would enable everyone to get tested for the virus free of cost.

The manifesto also promises free drinking water supply, setting up three new women police stations every year and one toilet per kilometer for women, free Tablets for students of government schools in view of their difficulties to access online education during the ongoing pandemic.

The Greater Hyderabad Municipal Corporation (GHMC) elections are scheduled to be held on December 1.

Asked about an official release from the Chief Minister's Office (CMO) that the state government has information that some leaders were trying to cause trouble ahead of the civic polls, Union Minister of State for Home G Kishan Reddy said the Chief Minister should say who is trying to create trouble.

State BJP president and MP Bandi Sanjay Kumar and other leaders were present on the occasion.