The wife of Colonel Santosh Babu, who was killed in a violent clash with the Chinese troops in Ladakh's Galwan Valley last month, has been appointed Deputy Collector. 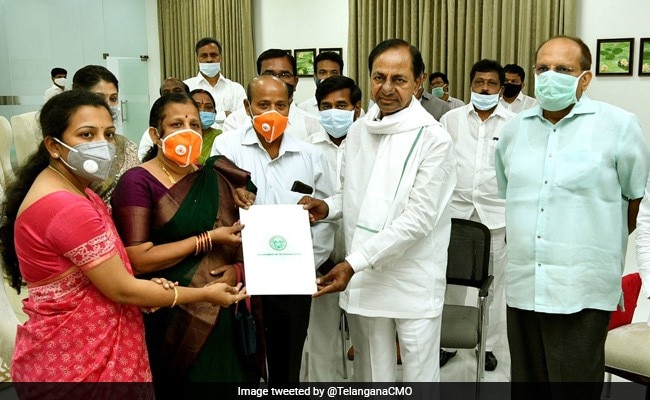 The wife of Colonel Santosh Babu, who was killed in a violent clash with the Chinese troops in Ladakh's Galwan Valley last month, has been appointed Deputy Collector.

Telangana Chief Minister K Chandrashekar Rao handed over the appointment letter to Santoshi Babu at a lunch attended by senior officers and state ministers on Wednesday.

Chief Minister Rao said Ms Santoshi, who has a four-year-old son and an eight-year-old daughter, must be posted only in Hyderabad and its surrounding areas. Chief Minister's Secretary, Smita Sabharwal, has been instructed to assist Ms Santoshi till the time she is properly trained for her new job.

Earlier in June, Mr Rao had appointed Ms Santoshi a Group-I service officer in the state government when he visited the family at their home in Suryapet town, about 130 km from Hyderabad. The family was also given financial support of Rs 5 crore by the state government.

The 39-year old Colonel was among the 20 soldiers who died for India in the Galwan Valley in eastern Ladakh on June 15 during a clash with Chinese troops in the biggest military confrontation between the nations in over five decades.

Santosh Babu was in the 16 Bihar regiment as Commanding Officer. He joined the Army in 2004 and was first posted in Jammu and Kashmir, according to his father.