The "Mississippi" hangar served as the first bus depot of the RTD under the Nizam's State Railway and was converted into a central bus station. 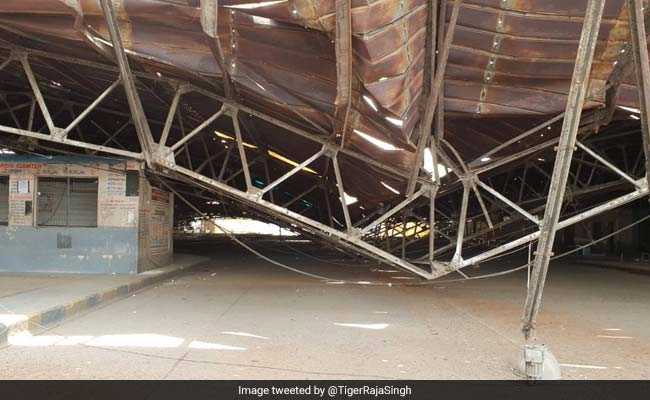 However, no one was injured in the incident. "The old Central Bus Station (CBS) at Gowliguda which has been a landmark for many decades collapsed on its own at 7.15 am.

There was no injury or loss of life to anyone as the complex was vacated a week ago itself in view of the weak structure," Senior Public Relations Manager G R Kiran said.

The area was barricaded as a precautionary measure, he told PTI.

The unique structure i.e. "Mississippi" aircraft hangar, which was imported from the Butler Manufacturing Company, USA was erected in 1930 and it is perhaps the first re-fabricated structure to be installed in Hyderabad to serve passengers, RTC officials said.

The old CBS aircraft hangar has been part of Hyderabad's transport heritage.

It has witnessed the transformation of the Nizam's Road Transport Department into Asia's biggest public road transporter (APSRTC-TSRTC), they said.

The "Mississippi" hangar served as the first bus depot of the RTD under the Nizam's State Railway.

Later, it was converted into a full-fledged central bus station catering to the needs of millions of people for almost six decades.

Subsequently, the interstate and district services operated from this hangar was shifted to Imlibun in 1994 and the city bus operations started in 2006.

"The "Mississippi" hangar was utilised as city bus terminal and enroute point also served as changeover point for city depot buses with operation of 2,385 trips per day.

Apart from accommodating as changeover point for buses," the officials said adding around 85,000 passengers were daily utilising the hangar.