Priyanka Chopra and Nick Jonas Wedding Cake: Nick Jonas and Priyanka Chopra's dreamy wedding at Jodhpur's Umaid Bhawan Palace has been making waves around the world. Here's a look at the couple's towering wedding cake that was 18 feet tall, made up of a total of 6 tiers. 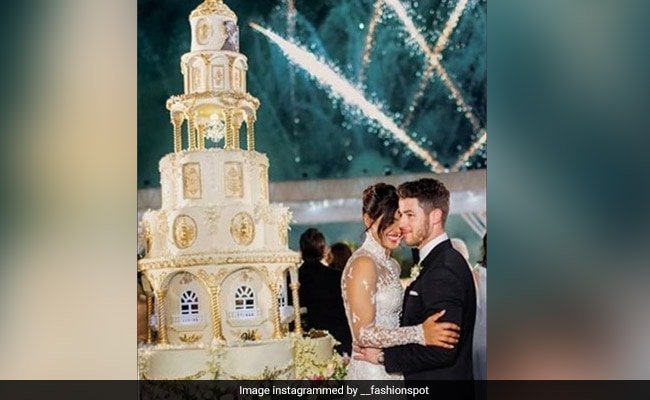 American singer Nick Jonas and Bollywood actor Priyanka Chopra got married in a luxurious and fun-filled wedding affair at Jodhpur's Umaid Bhawan Palace. The couple took wedding vows in a Christian ceremony on December 1st, followed by a Hindu wedding ceremony the next day. The couple also had an elaborate sangeet function, where the bride and the groom's families gave performances. The pictures and videos from the two day wedding affair were released by People magazine, which had exclusive rights to cover the wedding. During the Christian wedding, Priyanka Chopra looked resplendent and absolutely regal in a Ralph Lauren gown, with a trailing veil which was a whopping 75 feet long. She was walked down the aisle by her mother Madhu Chopra, who also shook a leg with her daughter during the Sangeet ceremony. Congratulations have been pouring for the lovely, happy couple from all around the world.

The Christian wedding ceremony in Umaid Bhawan was an emotional affair for both the families as Priyanka and Nick revealed in their People interview. A new and exciting detail from the December 1st wedding, that is creating a buzz on the internet, is Nick Jonas and Priyanka Chopra's gigantic wedding cake. According to reports, the wedding cake was a towering 18 feet tall 6-tier dessert which was created by chefs flown in by Nick Jonas from Dubai and Kuwait. According to a Pinvilla report, the beautiful wedding cake was created by Nick Jonas' personal chefs. It looks truly extravagant, quite fitting of the royal affair that was the wedding. A video of the newlyweds cutting the cake (with some difficulty), was posted on Instagram.

Also Read: This Dessert At Priyanka Chopra's Bridal Shower Was A Tribute To Nick And Priyanka's Love Story!

Does that look absolutely amazing? We can only imagine how long it must have taken the chefs to prepare and assemble a dessert of that size, and just how much it must have cost the couple to get it made! The couple didn't leave any stone unturned in making this milestone of their lives, one that will be remembered not just by them and their families, but by the rest of the world as well.

The wedding was an amalgamation of both the bride and the groom's cultures and was planned to bring together the most meaningful wedding traditions from both Christian and Hindu faiths. The details from the wonderful wedding have been wowing the world. Nick Jonas and Priyanka Chopra have certainly raised the bar for celebrity weddings, not just in India but around the world.