Anand Mahindra claimed that he learned about the e-rupee during a meeting of the RBI board and immediately started using it to purchase fruit from a vendor. 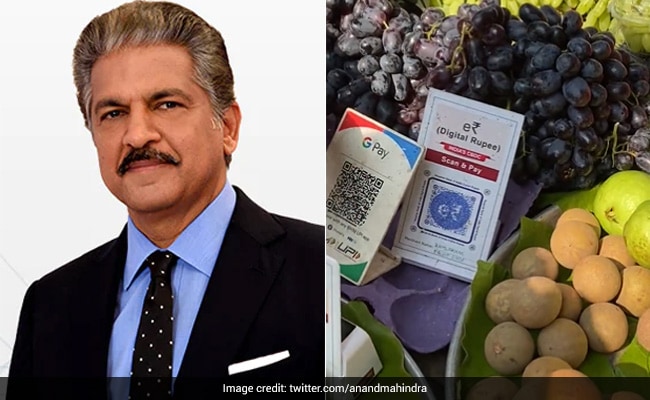 Anand Mahindra is a frequent user of social media.

Anand Mahindra, an avid social media user who frequently updates his 10.2 million Twitter followers with interesting videos and messages, this time shared a short video of a monetary transaction with digital rupees (e-R) on a vegetable seller's cart. He claimed in a tweet to have learned about the e-rupee, India's digital currency, at a Reserve Bank of India (RBI) board meeting and to have used it right away to purchase fruit from a vendor.

The industrialist shared the video with a caption that reads, "At the Reserve Bank's board meeting today, I learned about the RBI's digital currency, the e-rupee. Right after the meeting, I visited Bachche Lal Sahani, a nearby fruit vendor who is one of the first merchants to accept it. Digital India in action! (Got great pomegranates as well!)".

At the Reserve Bank's board meeting today I learned about the @RBI digital currency-the e-rupee. Right after the meeting I visited Bachche Lal Sahani, a nearby fruit vendor who is one of the first merchants to accept it. #DigitalIndia in action! (Got great pomegranates as well!) pic.twitter.com/OxFRWgI0ZJ

The Reserve Bank had announced the launch of the first pilot for retail digital e-rupee on December 01, 2022.

The retail digital rupee is in the form of a digital token that represents legal tender. The RBI will issue digital currency in the same denominations as paper currency and coins. Retail digital rupee transactions can be carried out through a digital wallet on mobile phones and other devices.

Only those digital wallets offered by banks participating in the RBI's digital rupee programme can transact in digital currency.

The retail digital currency is being distributed through banks. Transactions in digital currency can be carried out between person-to-person (P2P) and person-to-merchant (P2M). Payments to merchants can be made using QR (Quick Response) codes displayed at merchant locations.