Viral: Actor Vijay And MS Dhoni Catch Up On Beast Set In Chennai

Thank you Thala and Thalapathy for making our day 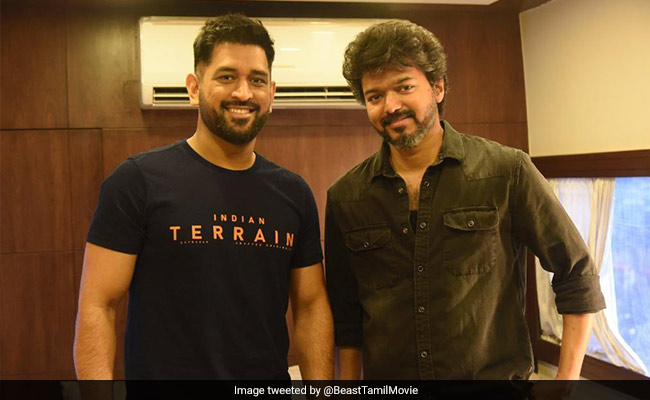 Tamil star Vijay and cricket sensation MS Dhoni met in Chennai on Thursday and took the Internet by storm. Wondering why they are trending on top? Simple, because it's 'Thala' MS Dhoni and 'Thalapathy' Vijay in a single frame. ICYDK, Thala is a Tamil word which translates to 'leader' in English and that's what Chennai Super Kings (CSK) fans call MS Dhoni, who is the captain of the franchise cricket team since the Indian Premier League (IPL) began in 2008. Also, for those who don't know, actor Vijay was announced as the brand ambassador of CSK during the IPL inaugural ceremony in 2008.

Vijay, who is called Thalapathy by his fans, and MS Dhoni's reunion (of sorts) has sent the Internet into a meltdown. The cricketer was reportedly shooting for a commercial at a location close to the Gokulam Studios in Chennai, where Vijay is filming Nelson Dilipkumar's Beast, and that's when they decided to catch up.

Vijay, who made his childhood debut at the age of 10 in Vetri in 1984, is a superstar in south film industry. He has acted in films like Thamizhan, Udhaya, Vettaikaaran, Thuppakki and Sarkar.

Vijay was last seen in Master. In his review for NDTV, film critic Saibal Chatterjee gave the film 3 stars out of 5 and wrote: "Vijay The Master is overlong all right, but Vijay and Vijay Sethupathi make a winning combination. Buoyed by a fantastic score by Anirudh Ravichander, here is a film that, for all its flaws, is keenly aware of the star power at its disposal and seldom punches below its weight."

vijay and ms dhonithala and thalapathy