Total Dhamaal: This Pic Of Madhuri Dixit And Anil Kapoor Is All About 'Thodi Masti, Thoda Magic' 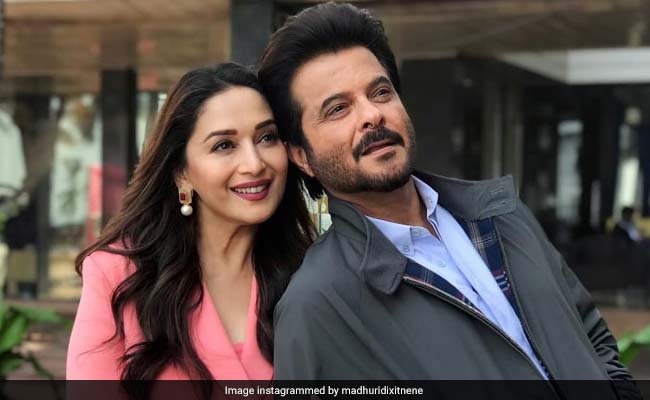 Film promotions can be exhausting but for Total Dhamaal co-stars Madhuri Dixit and Anil Kapoor, promotions are about "thodi masti, thoda magic" (like Madhuri Dixit described in her caption). On Friday, both the actors managed to take some time off their busy schedules and posted amazing pictures on their respective Instagram profiles. In the picture, Madhuri Dixit can be seen dressed in a soft pink pantsuit, while Anil Kapoor can be seen wearing a grey jacket and black trousers. The Devdas actress captioned the post: "Thodi masti, thoda magic, Total Dhamaal with Anil Kapoor." Meanwhile, Anil Kapoor also shared multiple pictures on his Instagram profile and wrote: "A week to Total Dhamaal."

Madhuri Dixit and Anil Kapoor co-starred in several hit films in the Eighties and Nineties. They worked together in films such as Tezaab, Beta, Lajja and Ram Lakhan among others. The duo frequently feature on each other's Instagram profile. Last month, Madhuri Dixit shared pictures from the sets of Total Dhamaal and wrote: "Last day on the sets of Total Dhamal, shooting with Anil Kapoor and Indra Kumar has been absolute fun."

Last day on the sets of #TotalDhamal, shooting with @anilskapoor & #Indrakumar has been absolute fun. Trailer out soon!

The actors, who gave the voices for Baloo and Nisha in Netflix's Mowgli: Legend Of The Jungle, shared identical posts from the film's red carpet a few months ago. Madhuri captioned it: "As the legend goes we have always got each other's back! Our mission to save Mowgli and look good while doing so is accomplished I think. Walking the carpet with Baloo in blue."

As the legend goes we have always got each other's back! Our mission to save #Mowgli & look good while doing so is accomplished I think! @anilskapoor Walking the carpet with Baloo in blue! @netflix_in

Besides Madhuri Dixit and Anil Kapoor, Total Dhamaal features Ajay Devgn, Riteish Deshmukh, Boman Irani, Arshad Warsi and Javed Jaffrey. The film has been directed by Indra Kumar and it will hit the screens on February 22.