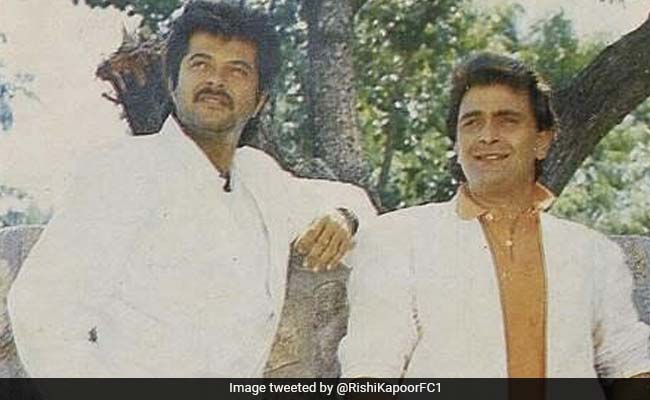 Anil Kapoor and Rishi Kapoor - childhood buddies and, later, colleagues - had interesting nicknames for each other. In his tribute post for his Gurudev co-star, Anil Kapoor addressed the late actor as "James" and signed off as "Patton." In a separate post on Thursday, the day Rishi Kapoor died aged 67 after battling cancer for two years, Anil Kapoor shared the story of why he began calling Rishi Kapoor by the nickname "James" - it involves a very famous James from Hollywood. "The reason I called Rishi Kapoor James was because according to me, if there was anyone who looked as good as James Dean, it was him. And he loved hearing that from me. He will always be James for me," Anil Kapoor wrote in his tweet. Actor James Dean, died at 24 after making just three films, was known for his boyish but brooding good looks. He is remembered as a youth icon, a status he achieved for his films on teenage disillusionment, like 1955's Rebel Without A Cause.

Anil Kapoor also attached a photo of James Dean to his post. May be, someday, Anil Kapoor will also tell us why Rishi Kapoor called him "Patton."

The reason I called Rishi Kapoor James was because according to me if there was anyone who looked as good as James Dean it was him...and he loved hearing that from me...he will always be James for me... pic.twitter.com/HrU3ZQbx3G

James Dean's first television appearance was in a Pepsi commercial. Interestingly, Anil Kapoor shared this photo of a bunch of Kapoor boys, including Rishi Kapoor, drinking Coca Cola in his send-off post for the late actor. "My dear James," wrote the 63-year-old actor, adding: "I don't know where to begin. From growing up to living our dreams on screen, we were together through it all. You were like an elder brother to me, a shoulder when I needed the support, a mentor when I needed that push and a friend always. Thank you for the endless love you gave my family and me. You were like a son to my mother and you knew that Krishna aunty was always like a mother to me. Your Patton forever."

In 2017, Rishi Kapoor revealed in a tweet that he and Anil Kapoor had nicknames for each other.

Thank you Patton! For those who may not know why we address each other "Patton"and "James"-this goes back to our earlier days in our careers https://t.co/MbeSiZWC2e

Rishi Kapoor and Anil Kapoor worked together in movies such as 1988's Vijay, 1993's Gurudev and 2000 release Karobaar: The Business of Love. Anil's daughter Sonam also worked with Rishi Kapoor in 2009's Delhi 6 and 2014's Bewakoofiyan. Sonam made her Bollywood debut opposite Rishi Kapoor's son Ranbir in Saawariyan.