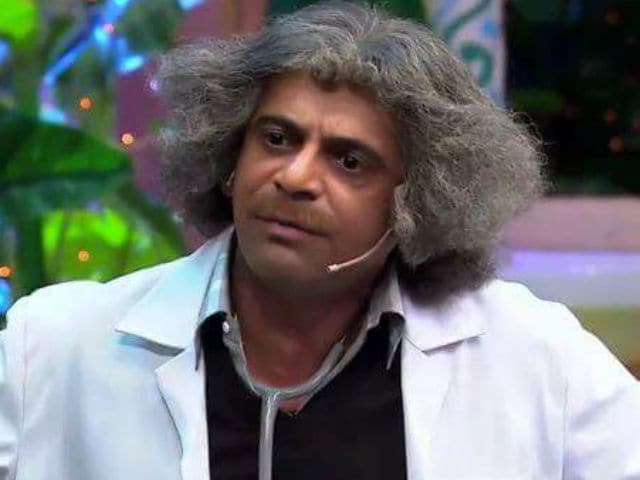 Sunil Grover on the sets of The Kapil Sharma Show

New Delhi: Sunil Grover is in no mood to return to The Kapil Sharma Show. However, the comedian says that he doesn't have any 'grudge' against anyone, reports Mumbai Mirror. Last month, Kapil Sharma had a fight with Sunil Grover (now former co-stars) on a flight. Mr Sharma, allegedly drunk, had reportedly hit Mr Grover with a shoe over the argument. "I'm here to work, not to have an argument with somebody and walk out of shows. I just want to make people laugh. Whatever happened was unfortunate, emergency landing ho gayi meri," Sunil Grover told Mumbai Mirror. After the fight, Mr Grover quit the show. In Mr Grover's support, his other co-stars of the show like Chandan Prabhakar, Kiku Sharda and Ali Asgar also took an exit.

After Sunil Grover's exit, that was a month, the viewership of The Kapil Sharma Show has dipped drastically. DNA reports that the show will be replaced by Dus Ka Dum, which is hosted by Salman Khan. "Ratings are not in anybody's control. Even I have done a show, where the ratings didn't meet expectations. If I was good with that system, I'd be working every day and doing 10 shows," told Sunil to Mumbai Mirror.

Comedian Raju Srivastava was included in the cast after the others quit and Upasna Singh, who featured as Kapil Sharma's bua in the show also returned.

Actor Rishi Kapoor, who has previously appeared on the show, also requested Kapil Sharma and Sunil Grover to reunite.

IPL. There is a look alike of @KapilSharmaK9 in the team of Sun Risers Hyderabad. Anyone finding @WhoSunilGrover in any team?Mil jao yaaron!

To which Sunil Grover replied:

During the weekend, The Kapil Sharma Show completed its centennial episode. Of the show, Sunil Grover said that he'll always be grateful to the platform.

Meanwhile, the celebrations were marred by a fresh controversy, where stand-up comedian Abijit Ganguly, accused the makers of the show and Kiku Sharda of plagiarism. In a lengthy Facebook post, Mr Ganguly wrote, "I had released a stand-up bit on YouTube and Facebook on 'having an elder brother' around two weeks back. No Kapil Sharma, plagiarism is not OK. It is not OK to do this. It is not OK to lift a man's joke and do it on national TV where millions will now think you goddam wrote that joke, and if I am to ever perform it, it comes off as I lifted it."

Promoted
Listen to the latest songs, only on JioSaavn.com
However, Kiku Sharda denied all the allegations made by Abijit Ganguly. "We are a big team and brainstorm before every episode. Someone cracked this joke and we made it a part of the script. It is possible that the same idea came to our writers, or maybe they had heard it somewhere. It is not that we do not use popular SMS or WhatsApp jokes. We can't keep track of who cracked what joke and when," he told The Times Of India.