As India enters the last week of a nationwide lockdown, there is a way to relive the glory of football via Netflix and Amazon Prime. 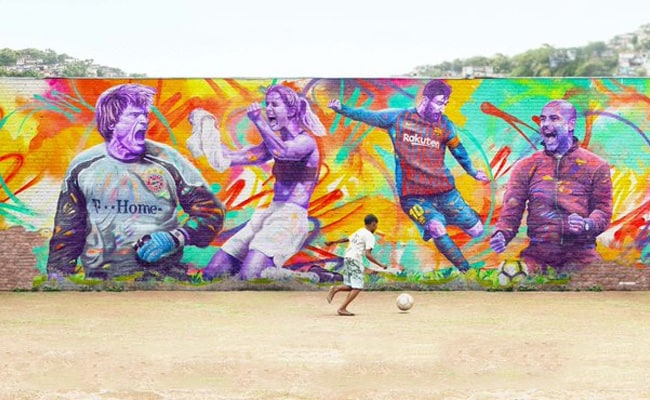 A poster of This Is Football on Amazon Prime

"Playing football is the most beautiful thing in the world," Diego Armando Maradona asserts in the Netflix docuseries Maradona In Mexico. Witnessing the embattled genius singing, dancing, exulting or losing his cool on the sidelines of a Mexican second division league game may not always be edifying, but it definitely is the next most exciting thing in the world if you love the man and the game that he enriched with his unmatched exploits.

For well over a month now, all live sports action has been on hold. As India enters the last week of a nationwide lockdown and we wait for the pandemic to retreat, there is a way to relive the glory of football via the fare available on Netflix and Amazon Prime. English midfielder Steven Gerrard, the subject of a documentary on this list of recommendations, says in Make Us Dream: "To make so many people happy with what you can do, it is unbelievable!" So here is a mix of ten films and series that capture the "the magic, beauty and heartbreak of football".

This Is Football, a six-episode Amazon Prime documentary series, celebrates the game that binds the world together. The episodes, each an hour or so long, tell captivating stories to highlight why the Beautiful Game has more followers than any religion. The series documents Liverpool FC fans in violence-wracked Rwanda, the Japanese women's World Cup football win three months after an earthquake and tsunami killed 16,000 people in the country, the rise of Bayern Munich from the amateur leagues, the role of the US in the growth of women's football since the early 1990s, the exploits of England's blind football team and the joys of slum football in Delhi. This is Football ends with an episode aimed at grasping the phenomenon that is Lionel Messi. What more do you want?

Directed by documentary filmmaker Angus Macqueen, the seven-part Netflix docuseries follows a beleaguered Diego Maradona as he lands in Culiacan, Mexico, to take charge of the second-tier club Dorados de Sinaloa. Culiacan is the home of the biggest drug cartel in Mexico and the birthplace of the dreaded "El Chapo" Guzman". Maradona's misadventures with cocaine make him the butt of ridicule. Somebody quips that the football icon's arrival in town is akin to letting "a diabetic into a candy shop". For both the man and the club, lying at the bottom of the league, the 2018-2019 season is a shot at redemption. Maradona brings the fans back to the club's unfinished stadium but at the outset of the film we see him being sent off the ground by the referee for unseemly behavior. But his presence stirs the laggards into action. You don't have to be a football fan to enjoy Maradona in Mexico.

Bobby Robson: More Than A Manager

The 100-minute Netflix film is a touching tribute to a quintessential football man who served the sport through a two-decade-long playing career followed by a 36-year stint as a manager. This is more than a rousing sporting story. It is a riveting story of resilience invested with warmth and flair by directors Gabriel Clarke and Torquil Jones. Bobby Robson lost his 15-year battle with cancer in 2009 - a malignant tumour was detected in his brain in 1995 but he continued to make an impact as a leader of men until 2004. His legacy lives on. Players of the quality of Ronaldo, Paul Gascoigne and Alan Shearer, among numerous others, owe a debt to him, as does current Tottenham Hotspur manager Jose Mourinho. A sharply insightful documentary.

The title of the Netflix film refers to July 12, 1998, the day of France's historic first World Cup triumph. Directed by Jean-Pierre Devillers, The Perfect Day, which is as wonderfully pulsating as a game of football at its best, records the event not merely as a sporting achievement, which it undeniably was for the host nation that had never before been in a FIFA World Cup title clash, but as a wide-ranging sociological probe. The day and its repercussions are traced through the reminiscences of football fans, celebs and athletes. A mother talks about experiencing labour pains to 2 am that morning and giving birth to a girl hours later, worrying all the while that she might miss the football action on television. A young man of Arab origin rues not being in the Stade de France stands because his father packed him off to Morocco to look up his ailing grandmother.

A Netflix documentary that spotlights the famed, and flawed, Franco-Algerian footballer, Le K Benzema, directed by Damien Piscarel and Florent Bodin, paints a portrait of a sporting superstar who has a life beyond the social media persona of a flashy young man with a fleet of swanky cars and private jets. Benzema, who has been in the eye of a scandal related to the Mathieu Valbuena sex tape-blackmail case and has an uneasy relationship with the French football establishment, is a reserved, privacy-loving man with a deep affinity for his family and friends back in his hometown of Bron as well as, controversially, for the land of his parents, Algeria. Real Madrid's Benzema, regarded as one of the finest strikers in the world, presents his side of the story, helped along by his friends and other well-wishers. Makes for fascinating viewing.

A defender's job on the football field is a dour, often thankless, exercise. But there is never any room in that job for dullness as borne out by El Corazon de Sergio Ramos (The Heart of Sergio Ramos). An eight-episode Amazon Prime docuseries, it presents a vibrant picture of the Spain and Real Madrid captain's life and times, complete with its many contradictions. The Los Blancos defender has been booked on the playing field more often than other club footballer, but there is another side to the man. His life in Seville with his family and its stud farm, the time he spends with his three children and fiance, and the pride he takes in his prized horse, Yucatan de Ramos get generous play in this account of his life delivered through his own voice and through the lens of fans and journalists. His family keeps him grounded as he absorbs the pressures that being a professional footballer exerts.

Sunderland 'Til I Die (Season 2)

In the eight episodes of Netflix's Sunderland 'Til I Die Season 1, Sunderland AFC fought in vain to claw their way back from the second tier to the Premiere League of which the English club was a part until the 2016-2017 season. The campaign could not have had a more disastrous end: Sunderland was relegated another level to League One, the third tier of English football. The focus of the series is on the fans and the officials struggling with the reality of the club's dwindling fortunes in every respect as much as it is on the ordinary football dished out by the team. The six episodes of Season 2 take the story of the club's free fall forward. The team is understandably obsessed with securing promotion, while the men and women holding the season tickets fret over the frustrating lack of consistency. But they will stand by the team come what may and hope for light to filter back into the club's Stadium of Light one day. Haven't seen Season 1? All the more reason to binge watch all 14 episodes in one go. You won't regret it.

Antoine Griezmann: The Making Of A Legend

An intimate football biography, this Netflix film directed by Alex Dell takes the audience into the sociable French forward's mind and heart as he opens up about his evolution as a man and an athlete. As a boy, he was considered too small and frail to be a footballer but, egged on by his father, joined Real Sociedad's youth academy at the age of 14. From being "a kid nobody wanted", Griezmann has evolved into a striker so versatile that (in the words of an agent) "for a coach, he's like a Swiss army knife". His positive image (despite a 13-month ban that he copped eight years ago for partying late in the night) has made the 29-year-old a darling of major brands, a great ambassador for football, and a pivot of Les Bleus, who he spearheaded to World Cup victory in 2018 in Russia. A film worthy of the FC Barcelona star.

A 100-minute Netflix film, River, El Mas Grande Siempre (River, Always The Greatest), helmed by Marcelo Altmark, Mariano Mucci and Luis A. Scallela, showcases the glorious history of Club Atletico River Plate, one of Argentina's most admired and followed sporting institutions. The story is narrated primarily by the icons of River Plate, a club located in the Nunez neighbourhood of Bueno Aires. The football team has won the Primera Division Championship a record 36 times. Names such as Enzo Francescoli, Claudio Caniggia, Andres D'Allessandro and Alfredo Di Stefano are littered all through the narration. The film culminates fittingly in the "superclasico" 2018 Copa Libertadores second-leg final between River Plate and Boca Juniors in Madrid's Santiago Barnabeu Stadium. There are other football club portraits on Netflix - four episodes of Boca Juniors Confidential, six episodes of First Team: Juventus and the two-hour film Barca Dreams - but the energy that the River film exudes is in a league of its own.

Sam Blair's documentary on Steven Gerrard, who spent most of his playing career as a central midfielder for Liverpool FC and is now the manager of the Scottish Premiership club Rangers, is an engaging multi-layered story about a man who enjoys demigod status among his fans. As Gerrard himself says upfront in the film: "Football is not about turning and playing. It is dealing with everything that comes with it". For the English great, what came with playing football was the inevitable burden of lifting Liverpool FC out of the trough the club had sunk into when he arrived on the scene and of finding his way through the paradigm shifts in English football following the arrival of Israeli-Russian businessman Roman Abramovic with the big money that he used to buy Chelsea. Make Us Dream, streaming on Amazon Prime, isn't only about Gerrard's eventful career, but also about the game's runaway commercialization and the consequent birth of football luminaries as big as, if not bigger than, the Hollywood superstars.