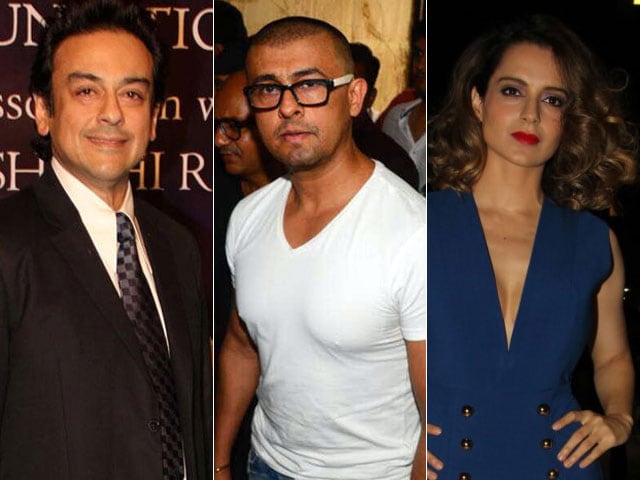 New Delhi: Sonu Nigam's tweets against the use of loudspeakers for the azaan in mosques has started a conversation among his colleagues, with several celebrities reacting to the 43-year-old singer's argument. Mr Nigam's posts about being woken up by the azaan fractured social media opinion last week, in particular a tweet in which he used the term 'gundagardi.' There were as many on his side as against and, in a grand climax, Mr Nigam invited the press to his Mumbai home to film his head being tonsured in a defiance response to a Muslim cleric's offer of Rs 10 lakh to anyone who would shave the singer's head and garland him with old shoes. Sonu Nigam's detractors included composer Wajid Khan but he has now received a vote of confidence from another colleague, singer Adnan Sami.

Mr Sami, who was born Pakistani but opted for Indian citizenship recently, told news agency ANI, "I have mostly stayed abroad. I don't know exactly what Sonu Nigam has said. I know Sonu very well. He's a good and old friend of mine. He has a good heart. I believe that Sonu will never do anything to hurt the sentiment of others. But, like I said before, I don't know what exactly he's said. I want to see it with my own eyes first." Mr Sami was speaking at the Mumbai airport after flying home.


Actor Saif Ali Khan in an interview to Indian Express described Sonu Nigam's tweets as "a bit aggressive," adding, "It's fine to express your views on the decibel levels." Lyricist Javed Akhtar told IANS that religious prayers should not disturb anyone. "As far as I think, no matter if it's a Masjid, Mandir, Church or Gurudwara, whatever is the place, do your prayers, but it shouldn't disturb anyone else," IANS quoted Mr Akhtar as saying.

Last week, actress Kangana Ranaut said she loves the azaan but that Mr Nigam's views should be considered, reported PTI. "I'm speaking for myself. Be it any religious activity, be it any gurudwaras, temples or mosques I love them. But that's not to say what he is saying shouldn't be considered, that's his opinion and he should be respected for that. And that's the idea of bringing it on social media so that it can be discussed," Kangana said, reported PTI.

On Twitter, the posts against the azaan elicited comments from actor Richa Chadha, filmmaker Pooja Bhatt, comedian Sunil Grover and several others from showbiz.

Last Thursday, Sonu Nigam invited hairstylist Aalim Hakim to tonsure him on camera after the Rs 10 lakh reward was offered. On Twitter, support poured in from actors like Anupam Kher, Randeep Hooda and Ranvir Shorey. bande mein hai dum," wrote Mr Kher while Mr Shorey said: "Huge respect for this, Sonu Nigam." Randeep Hooda jumped in to clarify Mr Nigam's intentions: "What Sonu Nigam meant was against loudspeakers not against a religion."

Speaking to the press ahead of his tonsure, Mr Nigam said: "You have to fight the fanatics, you can't just hide and comment from Twitter." Sonu Nigam, who also been criticised as anti-Muslim for his tweets, said: "Azaan and aarti are important, loudspeakers are not."

In response to tweets expressing doubt over whether or not Sonu Nigam could have actully heard the azaan from his home in Andheri West, the singer tweeted a recording of the morning call to prayer on Sunday:

Promoted
Listen to the latest songs, only on JioSaavn.com
Sonu Nigam recently collaborated with Sachin Tendulkar on the cricketer's singing debut. Earlier this year, he appeared as a judge on music reality show Indian Idol 9.

Meanwhile, actor Nawazuddin Siddiqui has posted a video in which he highlights the importance of being an artist over religious identity. Nawazuddin's video is titled '16.66%' and has been shot in the style of the controversial video recorded by Delhi student Gurmehar Kaur - by holding placards.