Hint- It's a member of the Kapoor family 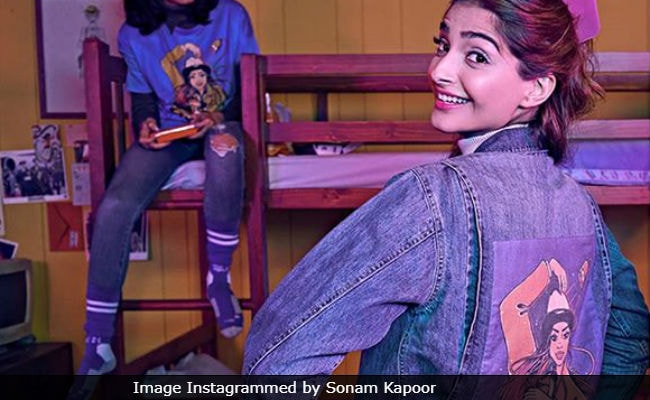 Sonam Kapoor is arguably one of the most fashionable actresses in Bollywood in today's times but seems like her source of fashion inspiration is none other than her father Anil Kapoor (going by latest Instagram post). On Tuesday, Sonam, who co-owns an apparel brand named Rheson along with her filmmaker sister Rhea Kapoor, gave us a glimpse of the brand's latest collection called Movie Posters. In the picture, Sonam can be seen dressed in a quirky denim shirt (from her latest collection of course), which is inspired from her father Anil Kapoor's 1987 hit film Mr India. The 33-year-old actress indirectly revealed that her "sense of style" could be attributed to her father and wrote: "Like father like daughter... It's no secret where our co-founders got their sense of style from!" Sonam's post received over 6 lakh likes within an hour.

The t-shirt that Sonam Kapoor can be seen wearing is a part of Rheson's latest collection called Movie Posters, which is inspired from some of the most legendary Bollywood films of the Eighties, including Nagin, Mr India and Himmatwala. On Monday, Sonam shared a video which gave us a sneak-peek of Rheason's Movie Poster collection. Sonam wrote: "Movie Posters, the new addition to our 80's collection inspired by Bollywood's legendary icons, is here."

Sonam Kapoor was first spotted wearing a statement t-shirt from Rheson's Movie Poster collection at the airport in July. She was seen sporting a blue Mr India t-shirt.

Needless to say, Sonam shares a great equation with her father Anil Kapoor, which is quite evident on her Instagram profile too. Anil Kapoor often features in Sonam's Instagram and Twitter profile. Last week, Sonam chanced upon an old photograph of Anil Kapoor along with Jackie Shroff and producer Vidhu Vinod Chopra from the sets of the Parinda and wrote: "Such a light-hearted and lovely memory."

Remember her Father's Day special post for Anil Kapoor? Sonam shared an absolutely adorable absolutely adorable throwback picture from her childhood days and wrote: "Happy Father's Day to my main man! To have you as a role model has been my greatest gift and I wish I had words to tell you how much I love you daddy." This is what we are talking about:

Happy Father's Day to my main man! To have you as a role model has been my greatest gift and I wish I had words to tell you how much I love you daddy. @AnilKapoor#JaaduKiJhappipic.twitter.com/OLKT35QPxn

On the work front, Sonam is currently filming for Abhishek Sharma's The Zoya Factor, co-starring Dulquer Salmaan in Mumbai. The film went on floors a few weeks ago. Sonam will also be seen sharing screen space with Anil Kapoor in her forthcoming film Ek Ladki Ko Dekha Toh Aisa Laga, which is slated to release next year.