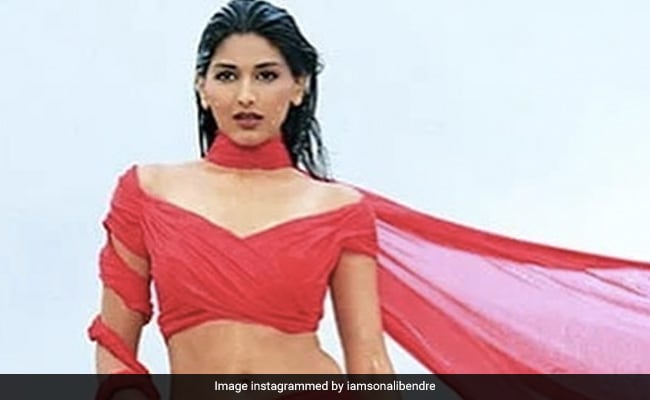 Actress Sonali Bendre, on Monday, went down memory lane to bring an amazing throwback picture of herself. The picture is a still from the song Jo Haal Dil Ka from Sonali Bendre's 1999 film Sarfarosh. The song features her and actor Aamir Khan. In the picture that Sonali shared on Instagram, she can be seen dressed in the iconic red outfit that she wore in the video of the song Jo Haal Dil Ka. The picture features her posing as the heavens pour. The picture and the memory of the song are surely the best things to be reminded of, on a "gloomy day" like today. Sharing the picture on Instagram, Sonali Bendre wrote: "A dash of red on a gloomy day #Sarfarosh."

As mentioned above, Sarfarosh was released in 1999, and it featured Sonali Bendre and Aamir Khan in the lead roles. Besides the storyline of the film, its songs are also loved by many fans.

Coming back to Sonali Bendre, the actress never fails to amaze her fans with her fabulous social media posts. She is quite active on Instagram and is often seen sharing pictures from her daily life on the platform.

Here are some pictures of the actress from her Instagram feed:

Sonali Bendre is best known for her work in films like Diljale, Hum Saath Saath Hain and many more. She was last seen on-screen as a judge on the TV show India's Best Dramebaaz.

"Is There Anything More Embarrassing?": Khushi Kapoor's Awkward Moment