Solo: A Star Wars Story has no such worries. It works. If not mind-blowingly dazzling, the film certainly proffers a slew of enticements. 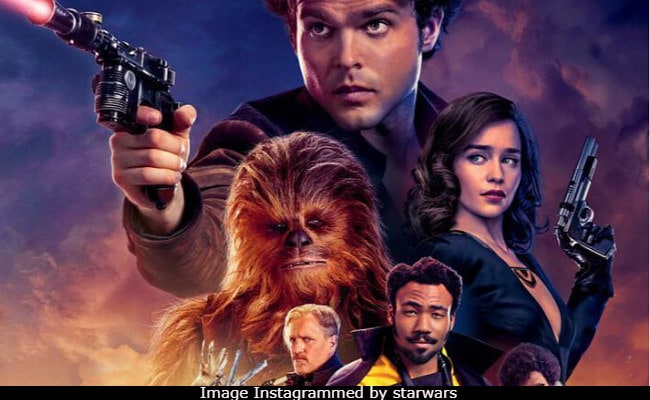 At times more bumpy than is good for the heavy payload that it has on board, the Solo: A Star Wars Story ride is heady and thrilling enough to please newcomers to the saga as well as its inveterate fans. Laced with humour and a sustained air of insouciance, this tale, helmed expertly by Ron Howard (who came on board halfway through the production), lets us into the formative circumstances that led to Han Solo becoming the rakish rebel pilot that pop culture celebrates.

The film is propped up firmly - and charmingly - enough by Alden Ehrenreich. There are moments when he appears to be mimicking Harrison Ford at his best, which isn't necessarily a good idea, but the young actor possesses the chops to nail the character and stamp his own personality on it, which, of course, make a huge difference.

"You look good, a little rougher on the edges, but you look very good": that is the compliment that the beautiful Qi'ra (Emilia Clarke) pays Han - very apt indeed - when the two meet a few years after they are separated in a bid to escape from the "mean streets" of a fascist, lawless planet in "a galaxy far, far away". Solo makes it; Qi'ra doesn't. "I'll be back," he vows. When their paths cross again - this time at a cocktail bash hosted by arch-villain Dryden Vos (Paul Bettany) - the times, and the equations, have changed beyond recognition.

Never tell him the odds. Solo: A #StarWars Story in theaters May 25. Get tickets now. Link in bio. #HanSolo

Qi'ra is now with the natty but menacing Dryden, a man with pronounced stretch-scars on his face - later on, she protests to her one-time beau that she isn't with him, she "owes" him - but Han obviously isn't the sort of guy who is going to give up on her.

Before the film hurtles to this point of the narrative, Han has been thrown out of the imperial academy for the temerity to have a mind of his own. That is the very mind that he brings into full play when he enlists with a gang of inter-planetary brigands led by Tobias Beckett (Woody Harrelson) and his girlfriend Val (Thandie Newton in a disappointingly brief role). Han needs money not only to return and rescue Qi'ra, but also to buy himself a ship.

"Do as I say, and when I say, and this time tomorrow you'll be able to buy your own ship," Beckett says to Han. But the younger man - and life in general in these parts - are way too fluid to allow mere words and promises decide the course of the future. Their mission is to steal a shipment of a high-value fuel. They mount an aerial assault on a train. That sets the tone for the rest of the film - it careens dizzyingly from one action high point to another.

Check out the exclusive Solo: A #StarWars Story @DolbyCinema poster and see the film in theaters May 25. #HanSolo

Yes, Solo: A Star Wars Story is fast-paced, even perhaps breathless, and zips around in its inter-galactic orbit with what feels like reckless glee, creating just the kind of atmosphere that the young, unflappable hero needs in order to thrive and grow. Although the film sets out to reveals the origins of Han Solo, it really does not tell us all that much about the younger years of the man. We catch him only after he has become a strapping lad gutsy enough to take on the crime syndicates that have run amok on Planet Corellia.

The father-son writing team of Lawrence and Jonathan Kasdan harness some of the spirit that defines the Star wars universe to give this film a zingy ring that holds up pretty well after a rather slow start. For good measure, they add their own bits to the mix, taking us to places where we haven't been before.

One crew. One shot. See Solo: A #StarWars Story, in theaters May 25. #HanSolo

The film is enlivened no end by its outstanding VFX, superb production design and some delightfully inventive creature effects. It throws up a gallery of characters that are attractive and intriguing in equal parts. The film tells us how Han got to be called Solo, but for the most part he isn't alone at all.

Early in the film, he acquires the furry Wookiee, Chewbacca (Joonas Suotamo), by his side after an initial bout of hostility when he is pushed by an irate military man into a mud pit. Their friendship blossoms quickly and Solo: A Star Wars Story begins to look like a bit of a bromance. But no damage done.


Promoted
Listen to the latest songs, only on JioSaavn.com
As far as the relationships in this film go, none is as interesting as the one between the charismatic, swaggering gambler Lando Calrissian (Danny Glover) and L3-37 (voiced by Phoebe Waller-Bridge), a female droid with exceptional navigational skills. Trust her to figure out without any fuss that it won't work.

Solo: A Star Wars Story has no such worries. It works. If not mind-blowingly dazzling, the film certainly proffers a slew of enticements that will leave nobody, least of all admirers of the world's most lovable space outlaw, short-changed. It has the strength to draw Force-loving fans to the multiplexes.