Skater Girl Review: The pivotal performance by Rachel Saanchita Gupta, who slips into the skin of Prerna Bhil without missing a beat, helps the film hit its stride and achieve a steady canter. 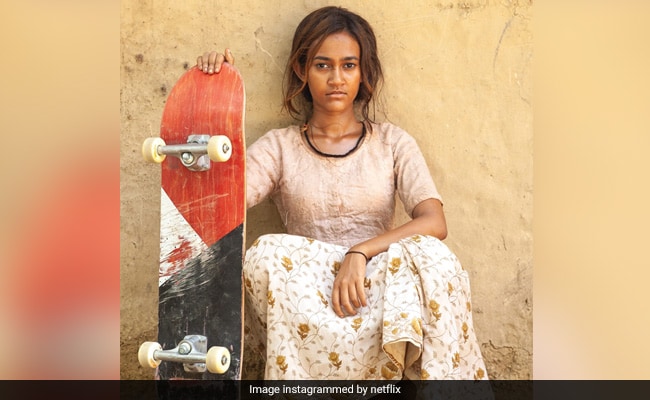 It isn't often that a movie inspires instant collective action. It is even rarer for a film to make a social impact before an audience has seen it. Skater Girl, out on Netflix, is one such. It has had a lasting effect on Khempur, which isn't even a dot on the map. The nondescript Rajasthan village located 45 km from Udaipur now has a community skatepark of its own where girls, the audience is told at the end of the film, "are encouraged to dream".

Directed by debutante Manjari Makijany, Skater Girl is a simple and heartwarming sports drama that zips along nicely and steers clear of the timeworn methods that Bollywood reserves for the underdog-fighting-all-odds genre. It revolves around an impoverished tribal teenager (newcomer Rachel Saanchita Gupta) who discovers skateboarding and makes a dash for freedom.

The girl, Prerna Bhil, has stopped going to school because she has no money to buy textbooks. What's worse is that her father is hell bent on marrying her off. She is trapped in a conservative, stratified society. Skateboarding promises to set her free.

She has to get the better of poverty and patriarchy, surmount other social obstacles and negotiate sharp caste barriers on her way to fulfilling her desire to compete in a national skateboarding event that could change her life forever.

Skater Girl, written by the director and her sister Vinati Makijany, blends a realistic account of life in an actual village with elements of restrained fiction while keeping overt melodrama at bay. The storyline may not abound in major surprises but it doesn't succumb to cliches either. The direct, unshowy methods that the film employs to get its point across enhance its efficacy and relatability.

The cast of Skater Girl includes Waheeda Rehman in a special appearance. The veteran actress requires all of two sequences to lend the story a strong emotional context. All the other performances in the film ring true thanks to actors who make a fair fist of seamlessly merging with the milieu.

The young boys and girls of Khempur learn to express themselves through a new sport brought into their midst by a 34-year-old Indian-British girl, Jessica (Amy Maghera). The latter has arrived in the village on a personal mission. Soon thereafter, a friend from Los Angeles, Erick (Jonathan Readwin), reaches the place on a skateboard and opens an avenue for the children.

It isn't, however, a smooth ride for Prerna despite the constant support she receives from her spunky kid brother Ankush (Shafin Patel). Her precarious plight - she is a bundle of fears, misgivings and doubts - reflects the enormity of the hurdles that a girl like her has to inevitably deal with before she can mount a skateboard, let alone take up the sport in right earnest.

Her stern father (Ambrish Saxena) sees her as no more than a helping hand for his wife (Swati Das), around the house and in the kitchen, until it is time to send her away as a bride. Prerna's growing friendship with an upper-caste boy Subodh (Vinayak Gupta) upsets the latter's teacher-father (Anurag Arora) just as much as it gets her own father's goat.

Breaching caste lines here is as difficult as getting the village folk to accept the girl's new-found passion for skateboarding. The replacement of the flat wooden carts that the children use as indigenous playthings by something as alien and empowering as skateboards represents a massive leap that isn't taken kindly to by the conservative community. The skateboarders and their mentors soon run into a volley of protests.

The whole village is up in arms against the kids because, in the excitement of discovering a new sport, not only do they give school a miss, they also begin to cause minor mishaps all around the village. The disruptive nature of skateboarding, a sport without rules that allows the participants to push the limits of what is possible, shatters the calm of the sleepy, dusty hamlet where demarcations - the most glaring of them is manifested by the segregated water handpump for the low caste villagers - are etched in stone.

"No matter where you go in the world everybody hates skateboards," Erick quips. In another scene, the Maharani (Waheeda Rehman) reminds Jessica that her people are averse to change. When matters come to a head, Erick and Jessica are left with no option but to attempt the seemingly impossible - carve out a dedicated space for the budding, over-enthusiastic skateboarders.

Many stumbles and hiccups later, the two visitors are ready with a plan that pave the way for the children to hit the ground running. A few of the skatepark builders and the skateboarding mentors are integrated into the film's plot.

One cannot be faulted for wondering if Skater Girl is another of those well-meaning films that end up propounding a Saviour Syndrome. To be fair, it is mindful of the pitfall. Jessica, whose real reasons for being in Khempur are revealed late in the film, is aware that, no matter what, she isn't the one around here who knows best. In a scene at a defining juncture of the story, she says to Erick: "Do I really know what's best for them? I am an outsider. Maybe I should stop interfering in their lives."

But she and Prerna, who graduates beyond the hand-holding stage once she decides to assert her own agency, have gone too far down the path of quiet rebellion to pull away from the process of emancipation set in motion by the free-spirited, rustic skateboarders. It takes some doing for the village children to master the many tricks of skateboarding but, as in the case of everything else that life throws at them, they are naturally adept at taking the rough with the smooth.

Effective writing carries the Skater Girl over the line without breaking a sweat. But it is the pivotal performance by Rachel Saanchita Gupta, who slips into the skin of Prerna Bhil without missing a beat, that helps the film hit its stride and achieve a steady canter.