Simmba, Singham And Sooryavanshi 'Unite' For An 'Awesome' Pic With Rohit Shetty 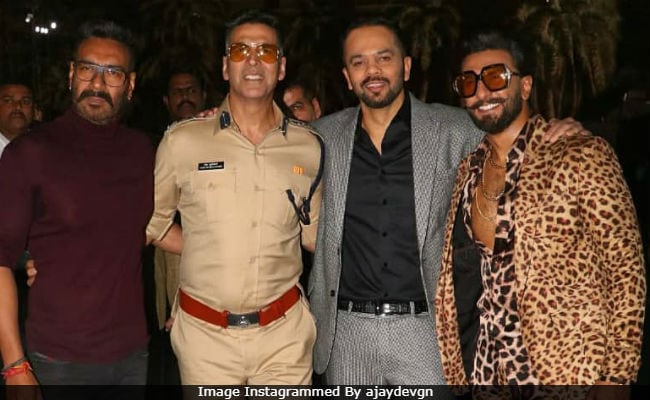 At the Umang Awards last night in Mumbai, superstars Ajay Devgn, Akshay Kumar and Ranveer Singh 'united' for a picture with filmmaker Rohit Shetty. Ajay Devgn, who has famously played Bajirao Singham in Rohit Shetty's Singham series, treated his Instafam to the 'awesome' picture and wrote, "United for Mumbai Police #Umang2019." Rohit Shetty recently directed Ranveer Singh in the blockbuster Simmba, in which Ajay Devgn had a special appearance while he also introduced Akshay Kumar's character Veer Sooryavanshi in the same film. Sooryavanshi, headlined by Akshay, will be a second spin-off of Rohit Shetty's Singham series after Simmba. "All the rockstars in one frame" and "such an awesome picture" are some of the comments posted on the picture.

At the success party of Simmba earlier this month, Rohit Shetty had also posted a picture with "Singham, Simmba and Sooryavanshi." After the party, he shared an update on the forthcoming film Sooryavanshi and told DNA, "We will finalise the script shortly."

Singham Simmba Sooryavanshi...Coming...Should I tell you Something that you don't know???

Simmba starred Ranveer Singh opposite Sara Ali Khan. The film released last month and has so far collected over Rs 240 crore. Simmba is also the eighth consecutive film by Rohit Shetty to cross the Rs 100 crore-mark at the box office.

Meanwhile, on the work front, Ranveer Singh is currently busy promoting Gully Boy, his film with Alia Bhatt. In Zoya Akhtar's Gully Boy, Ranveer plays a rapper. He also has '83 and Takht in the pipeline. Total Dhamaal and Taanaji - The Unsung Warrior are Ajay Devgn's upcoming films while Akshay Kumar will be next seen in Housefull 4 and the aforementioned Sooryavanshi.