A picture from Anushka Sharma and Virat Kohli's beach vacation served as the template for the Internet's meme-fest. 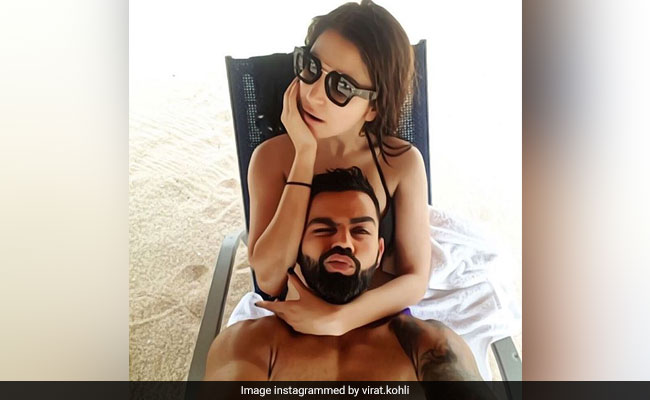 Trust the Internet to infuse humour in any situation or celebrity post. The latest picture, which served as the template for the Internet's meme-fest, was shared by cricketer Virat Kohli and it also featured his actress wife Anushka Sharma. Virat shared a picture from the couple's beach vacation diary and the Internet burst out with memes and jokes ranging from Sholay scenes analogy to suggesting it appears as "Manyavar swimwear" advertisement - Anushka and Virat have endorsed Manyavar for some years now. Some Internet users also superposed a picture of Sunil Grover dressed as Rinku Bhabhi, one of his onscreen characters from The Kapil Sharma Show, to add humour.

Get ready for some ROFL memes on Anushka and Virat's recent viral picture now:

Virat Kohli shared this picture on his social media handles - the picture has over 4.2 million likes on Instagram along with several adorable comments.

Virat Kohli recently returned from his West Indies tour, where Anushka had also accompanied him. The couple frequently take a spot on the list of trends and on Friday a video of Anushka kissing Virat's hand at an event in New Delhi also went viral.

Anushka Sharma is among the top crop of Bollywood actresses and she was last seen in 2018 film Zero, co-starring Shah Rukh Khan and Katrina Kaif. Anushka Sharma recently revealed that she decided to take time off from films because she was feeling 'worked up' balancing her personal and professional lives. Anushka Sharma is currently busy with the production of Netflix original series Mai, which she produces through her Clean Slate Films.