Shamshera Review: Moral of the story for Ranbir Kapoor - the actor should henceforth read his scripts with a more critical eye before buying into them. He owes it to his talent. 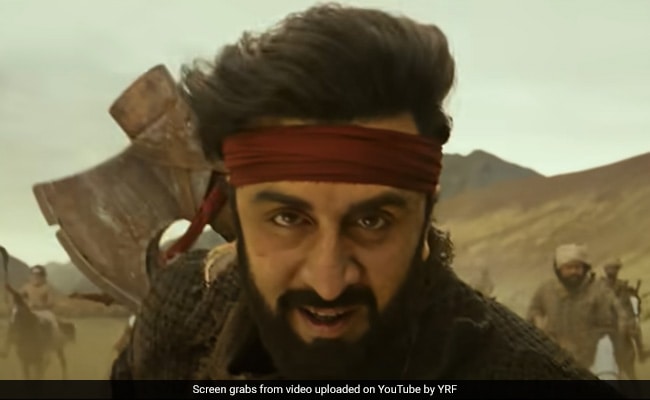 Another shot in the dark from the have-camera-will-shoot school of moviemaking, Shamshera is a horrendous period film. Period. When a movie does not work, critics often write it off as having 'lost the plot'. In this case, even that euphemism is out of the question. Shamshera, all action and no attention to detail, has no plot.

Produced by Yash Raj Films, Shamshera is an excruciatingly bad action flick that inflicts more torture on the audience than the sadistic villain in the film does on the people he enslaves and brutalizes. It is a stun-gun of a movie that just knocks one out cold.

After dragging the audience through two hours of absolute trash, it throws a mindless melee of a climax its way. We leave the theatre completely dazed - and clueless about what we just saw unfold on the screen.

The screenplay, written by the film's director Karan Malhotra in collaboration with Ekta Pathak Malhotra, has the feel of a haphazardly knit patchwork quilt - colourful, overwrought, garish and ugh. Yes, to put it in other words, Shamshera, set in the second half of the 19th century, an era in which the heroine is allowed to be draped in new-millennium fabrics, throws a bundle of things into a cauldron that turns everything to ash and dust.

In the initial minutes of the 158-minute film, in which a voiceover sets the 'historical' context for what is up ahead, one's curiosity is a bit piqued because it is apparent that the protagonist is, for a change, going to be a man who is from the lowest level of the caste hierarchy and, therefore, at the receiving end of discrimination. More important, he isn't one to take things lying down and is determined to lead his tribe out of darkness.

But as the story (whatever there is of it) progresses, the film's anti-caste stance evaporates and the battle royale boils down to a feud between two men - a tormentor and a revenge seeker. If bilge had a title, it would be Shamshera. Yes, Shamshera is Thugs of Hindostan-level bad, with its period detailing being at par with Mohenjodaro.

If there is anything that Shamshera proves, it is this: Bollywood, even if it is represented by its numero uno production banner - should either keep off history altogether or devise a statutory 'F' classification to denote falsification when it deals with matters that it does not understand.

Lead actor Ranbir Kapoor - in his first big screen appearance since 2018's Sanju - has to endure this turgid mess twice over, playing the eponymous character as well as his son, two men engaged, a quarter century apart, in a battle of freedom for their oppressed warrior tribe tricked into servility by an evil servant of the British Raj.

The principal antagonist is essayed by Sanjay Dutt. He does a wild variation on Agneepath's Kancha Cheena and KGF's Adheera and dissolves into a crude caricature that carries no menace at all. Owing to a script that is as confused as he is, the veteran actor, who is increasingly being typecast as an over-the-top villain, is unable to decide whether he wants to be a goofy baddie and raise a few laughs or play it straight. He falls between two stools.

Shamshera presents faux history in such a heavy-handed manner that you half expect a treacherous Mughal general or a cruel British officer to pop out of the woodwork and make a nuisance of himself to prepare the ground for the hypermasculine hero to display his prowess.

The Mughals are indeed mentioned but thankfully only in passing - they are blamed for the displacement of the fictional Khameran tribe from Rajputana - and a British colonel (played by Scottish actor Craig McGinlay) turns up late in the film and vows to instill the fear of the Queen in the hearts of the renegades. As it transpires, the Hindi-speaking White colonel is far less evil than the Hindustani villain.

In this totally male-dominated landscape, only two women have a bit to do. Iravati Harshe is cast as Shamshera's wife and Vaani Kapoor plays a dancer who helps Shamshera's son Lalli carry his father's axe-wielding legacy forward. But the duo is crowded out of the film, as is Ronit Bose Roy, who plays a mentor to Lalli as the young man who has grown up in captivity in a fort learns the ropes of the game before venturing out into the world to settle scores.

For a film that has reportedly had Rs 150 crore sunk into it, the visual effects are an eyesore. The fort (one of the film's principal locations) looks every inch like the cardboard structure that it probably is and a train sequence deep in the second half is so tacky that it runs off the rail even before it can get started. A lot of money down the drain.

Much worse than how the film looks is how it feels - an all-out assault on the senses. While on the VFX, one would be hard-pressed to figure out if the birds in the film are a kettle of hawks or a murder of crows. It really doesn't matter because they do not actually stick out in a film that scrapes the very bottom of the barrel with its detailing of the principal props and period components.

In a remote part of the land in the 19th century, there is a printing press that produces a daily Hindi newspaper called Dainik Darpan (Daily Mirror) that keeps the bad guy abreast of what is going on around him. What's more, the hero - remember he never got out of jail until he was a grown-up lad - knows enough to write neat notes in Devanagari for anybody who cares to read.

Moral of the story for Ranbir Kapoor: the actor should henceforth read his scripts with a more critical eye before buying into them. He owes it to his talent.

Bollywood, in the midst of an extended lean patch, is in desperate need of a turnaround. Will Shamshera bring the crowds back to the theatres? NO. It is an epic-scale dud.