Satyameva Jayate put up a "decent" score on Saturday 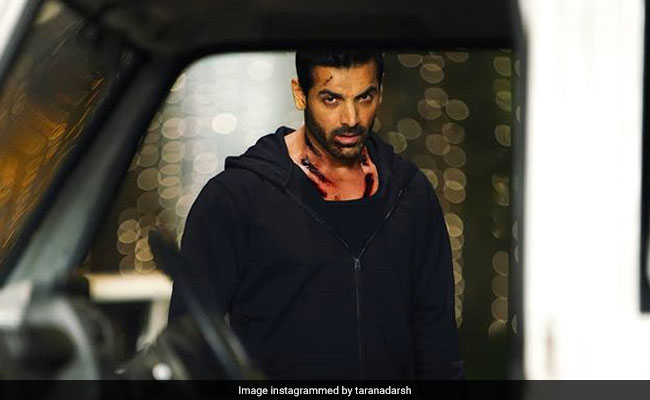 John Abraham in a still from Satyameva Jayate (Courtesy taranadarsh

John Abraham's Satyameva Jayate put up a "decent" score on Saturday, Box Office India reported. The Milap Zaveri-directed film showed a drop in its collection on second day after "surprising" opening day collections. But the Milap Zaveri-directed film has registered a "decent" total on Day 4 - Rs 7.25 crore - and the film's total collection currently stands at Rs 40.75 crore, the report added. "The film showed a little drop as single screens where the film was registering good collections showed a noticeable drop but that is sort of expected after a good run for three days," Box Office India reported.

The BIG HOLIDAY [#IndependenceDay] results in BIG NUMBERS at the BO... Both, #Gold and #SatyamevaJayate have TERRIFIC Day 1... Both, Akshay and John record their HIGHEST *Day 1* biz... The *combined* total is approx Rs 45 cr [+/-], which is HUMONGOUS... Yesss, BO is on

Film critic Saibal Chatterjee, in his review for NDTV, gave Satyameva Jayate 1 star out of 5. "But this is John Abraham's comfort zone. Going on the rampage is all in a day's work, be it springing to the aid of a young man wrongly confined in a police station and tortured or a girl assaulted by a policemen. Veer might be a ruthless killer for a cause but he is a good guy with a good enough reason for his marauding ways," he wrote.

John Abraham returns to the masala action genre with Satyameva Jayate, which also stars Manoj Bajpayee and Aisha Sharma. The film is a vigilante drama, which has been directed by Milap Zaveri.